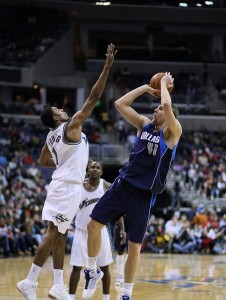 It was Dirk Nowitzki’s big night … oh, and his Dallas Mavericks won, too.

Tuesday night was itching with anticipation from many different angles on the Mavericks’ side of the spectrum. First and foremost, knocking down another win against the mannequin-like Utah Jazz would get them one step closer to the postseason. Although Dallas (48-31) is clearly in a playoff frame of mind, the objective goal of the night was moving Nowitzki up the ranks in NBA history. At the start of the game against Utah, the All-Star forward only needed 18 points to move him past Oscar Robertson and into the 10th position of the NBA’s scoring list. He and his teammates knew that even the tiniest of details were extremely fundamental in dealing with a flaccid team, so they started out strong. Massively strong.

During the first quarter, the Mavs hit 16 of 17 field goals (94.1 percent), the only missed shot being by Monta Ellis (who also took a nasty looking fall during the first 12 minutes and hit the back of his head on the court, but managed to simply walk it off). They would close the first half up 61-46, and managed to shoot 70.3 percent. The Jazz looked like lost puppies on the court whenever Dallas had the ball, regardless of the fact that Utah happened to out-rebound the Mavs 47-36 and even had a 52-34 advantage in points in the paint. The Mavericks simply gave an excellent shooting performance, led by Nowitzki, who accomplished the rare feat of moving up to 10th place during the opening minutes of the fourth quarter. He’d close the game with 21 points on 9-of-11 shooting, followed by Ellis (16 points) and Vince Carter (13 points). Derrick Favors scored 19 points for Utah, followed by Enes Kanter and Richard Jefferson (15 points each).

Even though Dallas managed to sweep this road trip with their win over the Jazz, the worst is yet to come. They go on to face the number one team in the Western Conference, the 60-18 San Antonio Spurs, on Thursday night back at home. The Spurs are Tony Parker-less for this current road trip, but that’s no reason to underestimate a team that has shut them down all season long.

Dallas is within one game of the Golden State Warriors (48-29), yet the Phoenix Suns (who the Mavs will face on Saturday) trail the boys in blue by one game as well.