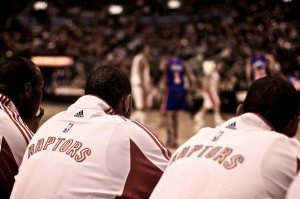 It was just a nice story at first: the plucky, young Toronto Raptors finding an identity, exceeding expectations, and pressing toward their first playoff berth since 2008.

The Dinos first clambered from the sub-.500 depths with a resounding victory on New Year’s Day, a 95-82 drubbing of the Indiana Pacers. When the calendar flipped they were 16-16, but by Valentine’s Day, their record stood at 28-24—a respectable showing and a pleasant surprise in an underwhelming Eastern Conference.

Fast forward one month to March 14 and Toronto were winners of nine of their last 12 and a full 10 games over .500 at 37-27. It seemed, perhaps, that the Raptors were less lucky upstarts and more the genuine article. But still, all was well within the realms of the true contenders. Toronto might have been better than the dregs of the East, but in a down year like this, that was not saying much. Was it?

Flash again to present day and the Raps are now 45-32 on the season, locked in a dead heat with the Chicago Bulls for the East’s third overall seed. Suspicions of Toronto’s legitimacy are beginning to crystalize among the vanguards of the Eastern Conference, particularly Indiana, which has entered a tailspin coincident with the Raptor’s ascendancy. Given the right conditions, a second-round playoff upset no longer sounds far-fetched because, well, see: Toronto is actually good. And the numbers bear it out.

Per NBA.com, the Raptors boast top-10 marks in both Defensive and Offensive Rating (points allowed and scored per 100 possessions, respectively). This is an encouraging statistical nugget, especially considering many experts regard this “dual top 10” threshold as the yardstick by which genuine contenders are measured.

According to data compiled by sportingcharts.com, of the 20 teams who reached the NBA Finals between 2002 and 2012, 14 of them ranked top-10 during the season in offensive efficiency, while a whopping 17 held top-10 defensive marks. These data illustrate a fairly simple point: it’s extremely difficult to reach the NBA Finals without an excellent offense and an excellent defense.

To be fair, Toronto sits at the outer margins of this “dual top 10” club: they are exactly 10th in Offensive Rating and just ninth in Defensive Rating. But no one is making a case for the Raptors’ title contention. Rather, these impressive ratings indicate a handful of promising possibilities: that Toronto’s success is no fluke; that the roster is commendably balanced in its construction; that current team schemes serve to maximize personnel potential; and that the Raptors’ style is well-suited for postseason play.

If the above data seem questionable, or you prefer using traditional metrics to gauge a team, consider that the Raptors also hold opponents to just 97.6 points per game (seventh-best in the league, per NBA.com) and rank 10th in the NBA in opponent field-goal percentage, holding teams to just 44.8 percent from the field. The stinginess of these defensive metrics is not inflated by the Raptors’ below-average pace (seventh slowest in the league), as they are calculated on a per 100 possession basis or have little to do with how frequently an opponent shoots.

Speaking of pace, though, it should also be noted that the Raptors score their own points at almost exactly the 2014 league average (100.8 per game, 15th of 30 clubs) despite playing slowly. This suggests that if Toronto chose to speed up its offense, they would likely score at a near-top-10 clip. Obviously they have their reasons for eschewing this path (player personnel, a defense-first philosophy), but it’s a fun thought experiment.

Toronto is also a good rebounding team: they allow only 41.1 opponent rebounds per game (fourth best in the NBA), hold teams to a nightly average of just 10.4 offensive boards (ninth overall), and snare 11.4 offensive caroms of their own (fourteenth overall), without adopting a play style that prioritizes extra possessions. Laid alongside the encouraging offensive and defensive metrics we have already discussed, these figures paint a portrait of a Raptors squad without any glaring weaknesses.

Before riots break out in the streets and Raptors banners are waved en masse, let it be known this is not necessarily accurate.

For one, Toronto as a team is merely “pretty good” at shooting the three (36.8 percent, 12th overall), yet relies heavily on the trey, hoisting 23.1 attempts per game. Dependence on the long-range bomb can spell doom on a cold shooting night, and the consequences of a bad night in a seven-game series are magnified 10-fold.

Furthermore, DeMar DeRozan and Kyle Lowry—the steam in Toronto’s offensive engine—are unproven postseason performers who, when tasked with carrying the offense, may wilt under increased scrutiny. Gaps that exist in the regular season tend to close up in the playoffs, and whether they can overcome that remains to be seen.

Toronto’s frontcourt is also a question mark: Amir Johnson is a nice player but at just 210 pounds can be bullied in the post, and Jonas Valanciunas is a foul magnet (4.0 fouls per 36 minutes, per Basketball Reference) whose presence is not easily replaced when he hits the pine. Things could go south quickly if both players are struggling.

Most concerning of all, however, is the Raptors’ collective lack of playoff experience. Not a single player on the roster has played a meaningful role in a seven-game series, and for neophytes, adjusting to the rigors of the postseason is no simple task.

These are genuine concerns, but caveats aside the data build a fairly convincing case for Toronto as the dark horse contender in the East.

As things currently stand the Raptors hold the third seed in the Eastern Conference playoff race and are slated to play the Washington Wizards in Round 1. This is a favorable matchup in several respects: Washington is a mediocre rebounding team (20th overall) whose best frontcourt player, Nene, is playing limited minutes. Toronto’s backcourt of Lowry, DeRozan, and Terrence Ross also presents a mismatch for D.C with its length and scoring ability.

At his best, Lowry can play John Wall to a draw, while DeRozan and Ross can use their athleticism to abuse the 6’5” Bradley Beal, who will invariably be stuck defending one of the two while Trevor Ariza does his damnedest to neutralize the other.

The obvious choice here for Wizards coach Randy Wittman would seem to be stashing Beal on Ross, who has a less developed dribble-drive game and gets fewer touches. This would allow him to employ Ariza as a stopper on the greatly improved DeRozan and potentially stymie the focal point of Toronto’s offense.

Considering Ross’ devastating athleticism and slight height advantage, though, putting an inadequate defender on him may spring a leak that Washington is ill-equipped to plug. After all, Ross did explode for 51 points earlier in the year under similar circumstances against the Los Angeles Clippers (R.I.P. Jared Dudley).

If Toronto can in fact dispatch Washington in Round 1, their chances of success in the next series are largely contingent upon whom they face: the Miami Heat or the Indiana Pacers. As things currently stand, Indiana is the second seed and the Raptors are more than likely salivating.

Why? Mostly because Toronto’s sturdy “D” presents problems for the Pacers’ anemic offense and because Valanciunas is a big body who can legitimately bang with Roy Hibbert and disrupt his game. Considering Hibbert was a distinct advantage for Indy last year against Miami, curtailing his production could be instrumental in a Raptors upset.

Lastly, the midrange shots Indiana famously foists upon its opponents are actually a staple crop in Toronto’s offense. DeRozan in particular loves the shot, while Lowry pulls the trigger when necessary and hits at a decent 34.4 percent clip (per Basketball Reference).

No matter what happens, the Raptors are a fun team that plays good basketball. If they can in fact finagle their way to the Eastern Conference Finals, it would be a resounding success. For a franchise without much pedigree that has been mired in mediocrity since the Vince Carter era, a top-eight finish would be a dream come true, and that’s always nice to see.

Whether they put the pieces together remains to be seen, but for the first time in a long time they finally have pieces with which to work. That’s a victory in itself. The organization should be pleased with its progress.