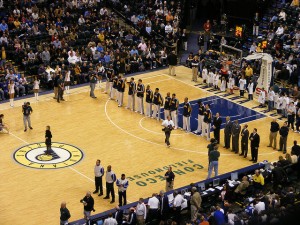 The Pacers will continue to play basketball in Indianapolis for at least a decade under a $160 million deal the team and the city plan to announce Monday morning.

The agreement locks the team into Bankers Life Fieldhouse for 10 years, with three one-year renewal options, according to documents obtained by The Indianapolis Star. In exchange, the city will provide $160 million to cover operating costs and facility upgrades…

The agreement locks in the Pacers through the 2023-24 basketball season, and possibly through the end of the 2026-27 season. That coincides with the final debt service payments on the fieldhouse.

The deal sticks even if the Pacers begin to lose money. Indy Star

The Seattle Supersonics were moved from Seattle to Oklahoma City where they are now known as the Oklahoma City Thunder. The loss has prompted the city of Seattle to contact franchises around the league to inquire about the potential of moving from their current location to Seattle. As a result, smaller cities are scrambling to secure deals with teams so they are not tempted by Seattle’s bid. According to reports, the Kings were nearing a deal with Seattle but the NBA voted against relocation.

Seattle has made it clear that they are not done bidding for a new team. Indianapolis made the deal with Pacers now to avoid a bidding war later. Other cities are extremely worried about this issue such as the Milwaukee. The Bucks are asking to subsidize the Bradley Center, the arena in Milwaukee, for $400 million dollars which is already getting strong opposition.

This is a story that bears watching for the fans of all franchises in smaller cities. – AL