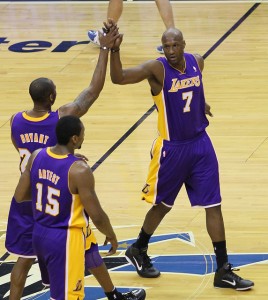 The New York Knicks have expressed interest in signing veteran free agent Lamar Odom, according to sources close to the situation.

Sources told ESPN.com that the Knicks, at the behest of new team president Phil Jackson, have been looking into the possibility of signing Odom since the 34-year-old’s short stint playing in Spain ended and are weighing whether to go through with adding the Queens native to their roster before the regular season ends.

Among the options the Knicks are considering, sources said, is signing Odom before Wednesday’s regular-season finale to a contract that includes a team option for next season.

Doing so would enable the Knicks to work with Odom throughout the offseason before deciding if he’s ready to play — physically and mentally — in time for the start of the 2014-15 season. ESPN

This is an unconfirmed story that cites unnamed sources so let’s take the story with a grain of salt. That said, bringing Odom onto a team with combustible chemistry is a horrible idea. Odom is a walking rumor mill, the exact opposite of what this team needs. He’s not a quick fix to add depth to the roster. After no NBA team signed him to a contract, he signed a two-month contract to play in Spain where he played only two games before a back injury forced him to end that run. He’s done. Everyone noticed it but Phil Jackson?