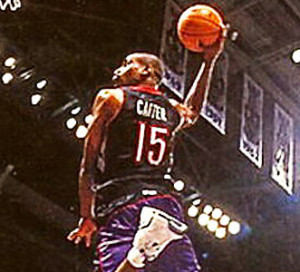 Vince Carter is the best dunker in NBA history. But will he be remembered for anything else beyond that? When all is said and done, how will we look back at Vince Carter?

Reminiscing about Carter’s career really takes me back to the good old days. I’ve been a Vince Carter fan since his NBA debut on February 5, 1999, when he was rocking that appalling Toronto Raptors jersey with a dribbling raptor slapped onto it.  His first dunk in the NBA was off a lob from Charles Oakley, and Carter executed it with a smooth swagger.  He always made the most insane plays look easy. One thing about Vince Carter is that he was effective while also being a great entertainer on the NBA hardwood floor. From that debut on, Vince Carter kept getting better. He eventually went on to grab Rookie of the Year, reignited the NBA Dunk Contest in 2000 by annihilating his opponents, won a gold medal in the Olympics, carried a mediocre Raptors team to the playoffs a few times, and teamed up with Jason Kidd on the New Jersey Nets for a rebirth.

Despite some nagging knee injuries, Carter has had an amazing NBA career and continues to add to his legacy. He’s earned plenty of lofty nicknames on his journey, such as Half-Man, Half-Amazing, Vinsanity, and Fourth-quarter Carter. Carter’s definitely made an imprint in NBA history, and his nicknames tell the story of his legend.

Half-Man, Half-Amazing was rightfully earned by VC because of the amazing plays he pulled off in general. The dunks were out of this world, but his skill and talent allowed him to drop jaws with more than just dunks. The man has great court vision, and dishes out dimes with emphasis. He’s also wowed the crowd with amazing blocks, circus shots, and miscellaneous tasks, such as winning a jump-ball against Yao Ming. Carter knows how to orchestrate the offense, and has the ability to create his own shot, creating beautiful problems for his opposition. In his prime, he was arguably the best athlete in the game with his leaping ability, strength, and quick first step. He might have been Half-Man, Half-Amazing, but during his prime the Half-Amazing side showed up the most.

Then we have Vinsanity. Vinsanity was a phenomenon that started when Carter was on the Raptors doing Statue-of-Liberty 360 dunks, tomahawk windmill jams, and other insane rim-rockers on a daily basis. A dunk was never just two points to him. It was a ferocious statement of creativity that created a spark for his team and deflated the momentum of the opposition. These days there are dunkers like Blake Griffin, Paul George, and LeBron James that throw down some incredible jams, but nobody today can touch what Carter used to do. His in-game slams were so incredibly insane that the fans of the opposing team would cheer for Carter, and despite his fantastic overall game, his dunks managed to overshadow the other parts of his repertoire for a while.

Fourth-quarter Carter was a nickname that didn’t really stick, and it wasn’t because he wasn’t clutch; it just didn’t have a nice ring to it. VC has never been a player that shied away from taking big shots. When the moment became the moment, he wanted the ball in his hands. I’ve seen him make some insane shots in the final seconds, including a fade-away three-pointer against the Boston Celtics to win a game. Just watching him in the fourth quarter, there’s a fire in his eyes that only the greats possess. VC in his prime could ferociously drive down the lane, pop a mid-range jumper in your face or launch it with accuracy from downtown. In a study of clutch shooters from 2000 through 2012, Vince Carter has been documented to shoot 40.1 percent in the fourth quarter with five minutes or less. This is better than Kobe Bryant, Paul Pierce, and Tracy McGrady. By the time the fourth quarter rolled around, he had the cool hand to steal the game and burn the opposition.

When Carter was in his prime, his regular season numbers were of All-Star caliber, but he also stepped it up in the playoffs. In 2001, with the Raptors, he had an unforgettable playoff matchup against 2001 MVP Allen Iverson. The two went back and forth, trying to top one another every game. VC dropped a 39-point game and a 50-point game (with nine three-pointers) in the series. He continued to be effectively amazing in the postseason with the Nets, especially in the 2005-06 season, when he averaged 26.1 points, 6.2 rebounds, 4.6 assists, and 1.6 steals per game.

These days the “soft” comments are gone, the knee injuries aren’t as nagging, his defense has improved with time, and the hops have been taken down a notch as well, as expected. Carter still continues to be effective off the bench for the Dallas Mavericks, and he’s actually aged gracefully as a baller. In fact, he’s been effective enough to earn some Sixth Man of the Year noise. Every now and then he even turns back the clock to slam it home on some young fella out there, just to remind people he can still do it.

So, how will Vince Carter be remembered in the grand scheme of the NBA? Well, he’s definitely the best dunker of all time. However, Vince Carter deserves to be regarded as one of the top shooting guards of the game when that time comes around, but his story isn’t over yet.