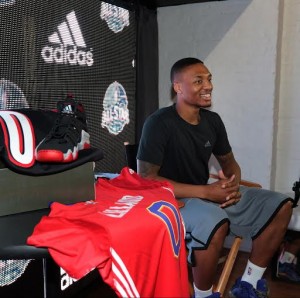 All images courtesy of adidas.

USA Today Sports reports that the lucrative agreement is one of the richest ever given to a professional basketball player, while ESPN.com reports that the contract could be worth as much as $100 million over 10 years.

Lillard, the 2012 No. 6 pick out of Weber State, has worn Adidas throughout his pro career. After unanimously winning the 2013 Rookie of the Year award and earning selection to the 2014 All-Star Game, Lillard was in position to opt out of his contract this summer. Instead, he will remain with Adidas, which also counts Derrick Rose, Dwight Howard and John Wall among its top endorsers.

“Adidas has been great to me over my first two seasons,” Lillard said in a statement. “I’ve had the opportunity to wear a lot of great product, help design special versions of shoes, be a part of TV commercials and travel the world with the brand. I’m excited for what the future holds for me and Adidas.” Sports Illustrated

Adidas has quite a reputation with the top guards in the game all the way back to early Kobe Bryant and Tracy McGrady. This deal probably doesn’t happen if Derrick Rose doesn’t get hurt, the former headliner for adidas; however, Lillard earned this deal by emerging as a real star. He participated in five events during the 2014 NBA All-Star weekend, the first player ever to do so, and has been instrumental in this year’s playoff berth for the Portland Trail Blazers.

Congrats to the two partners. I have a feeling neither party will regret this decision. – AL