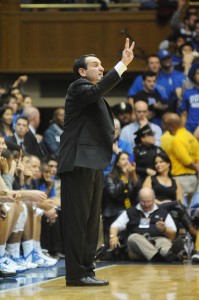 Mike D’Antoni will not coach the Los Angeles Lakers next year.

With two games left in the season and an overall record of 25 wins and 55 losses, there’s nothing that can be said or done to prevent D’Antoni from getting the axe as head coach. He hasn’t received a vote of confidence from All-Star guard Kobe Bryant, and the Lakers front office has been unusually quiet about their plans for the future. D’Antoni still has a year on his contract, but since he’s lost approval from the Lakers locker room, fan base, and front office, it’s more than fair to say he’ll be coaching his last two Lakers games this week.

After Phil Jackson signed a five-year deal to join the New York Knicks as team president, the Lakers’ dreams of seeing the triangle again on a nightly basis were washed down the drain, and the “we want Phil” chants in Staples Center immediately followed. While the most popular subject has been which players the Lakers will acquire over the next two-to-three free agencies, the more important subject is: who will coach the franchise back to contention?

The Lakers must re-approach Mike Krzyzewski once again and “make him an offer he can’t refuse.”

I’m not suggesting Jim Buss and Mitch Kupchak hold a gun to Krzyzewski’s head (he’s not a band leader), but it will take similar persuasion to pry Coach K from Duke.

Krzyzewski is one of the most successful coaches in college basketball, and is the best Lakers head coach candidate in the NCAA and NBA. He’s been to 11 Final Fours, has four national championships, 11 regional championships, 13 ACC tournament championships, and 13 Elite Eight appearances. He’s won the Naismith College Coach of the Year award three times as well. All of his former players respect him, and there’s rarely anything but admiration expressed when anyone at Duke speaks of him. The Lakers’ upcoming coaching vacancy is a perfect fit, more so than it was a decade ago when the Lakers threw everything but the keys to Staples Center at the hall-of-fame coach.

Mike Krzyzewski taking over the Lakers head coaching job gives Lakers fans a coach with as much prestige and notoriety as Phil Jackson. They gain a locker room a leader who will command the respect of rookies and veterans, and it grants Jim Buss his first big win for the future of the franchise. Although Coach K might not be the free-agent draw the Lakers seek of their next coach, their rebounding process is slow motion, as the Lakers won’t get back into Larry O’Brien contention anytime soon. With decent cap space and a small window of rebuilding time deemed acceptable by an anxious Kobe Bryant and Lakers fans alike, Krzyzewski will have two years to learn on the job, maximum. That’s a very short amount of time compared to some first-time head coaches who take four-plus years to adjust to the NBA game.

When Dwight Howard turned his back on Los Angeles and opted to continue his career with the Houston Rockets, the main criticism surrounding him for not sticking around was an inability to perform under the type of pressure being in a city like Los Angeles brings. In comparison, Krzyzewski has felt the same pressure; after all, the students at Duke aren’t called “Cameron Crazies” for their patience and understanding. Krzyzewski has been in win-now mode at Duke for his entire 33-year tenure. Stepping into the Lakers head coaching role brings a familiar atmosphere, filled with lofty expectations and minimal patience.

His commitment to Team USA is the greatest reason for Krzyzewski to coach the Lakers. With an overall record of 62-1, he’s demonstrated the ability to coach a group of superstars with excellent harmony. It’s impressive how he’s been able to get Team USA members to work out and perform during a time when they would most likely rather rest or party. He convinces guys to buy into a system for the ultimate world prize, while the majority of players on the roster dictate the system on their respective NBA teams. The next Lakers head coach needs that type of experience and leadership qualities.

Krzyzewski can also make noise for going from being the highest paid coach in college sports to one of the highest paid coaches in the NBA, if Jim Buss is willing to open his wallet. Perhaps that won’t take much convincing, since Jim was a proponent of Coach K taking over the Lakers head coaching duties 10 years ago, and emptying his wallet is exactly what a move like this will take. It’s the smartest move the Lakers can make, however their recent track record has proven that at the moment they’re allergic to being intelligent.

One thing is for sure, the Lakers head coaching vacancy will need to fill multiple voids. The Lakers are at an all-time high in fan disapproval, front office confusion, and locker room disinterest. There’s one man that can bring peace to the purple and gold…. Uprooting him from Cameron Indoor Stadium to Staples Center isn’t a foregone conclusion, it’s a necessary step in the right direction.