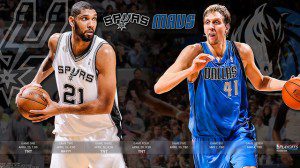 There is a famous Latin saying by Roman Stoic philosopher Seneca: “ignis aurum probat” which translates to “fire tests gold”. This happens to be the motto of many sophisticated establishments and franchises who wish to remind people that just as gold needs to be tempered by fire in order to strengthen it, strong men must endure a significant amount of suffering in order to become impenetrable when facing their adversaries.

That being said, the eighth-seeded Dallas Mavericks will face the first place San Antonio Spurs in the first round of the NBA playoffs on Sunday. The odds are clearly against Dallas since the team was violently battered by San Antonio all four times they faced them during the regular season. The Mavericks’ defense (who rank 22nd in the league) just couldn’t find an answer to the Spurs prismatic three-point shooting and were left exposed and (regardless of their veteran status) they limped off like a wounded lion cub. However, the playoffs are a clean slate, and you can only toy with a cub for so long before it grows up and mauls the absolute hell out of you.

The Mavericks have expressed their dislike for the “underdog” label, they’re just there to win it and move on. But unfortunately, sports analysts are taking an unusual amount of delight in dubbing the boys in blue the official dark horse of round one. Las Vegas even has the Mavericks’ point spread at +9 (Bovada). It’s hard to imagine that a team with Dirk Nowitzki (who has been said to be one of the most unguardable players in the NBA), Monta Ellis, Shawn Marion, Vince Carter and Brandan Wright, could be written off so easily. Especially when they’re led into battle by head coach Rick Carlisle, a man who runs an extremely variegated and powerful offense. The Mavs are imperturbable when it comes to their offense, a unique tool that can be used to their advantage if they happen to be behind or manage to blow a large lead in the fourth, but that means nothing if they can’t turn their defensive methods around. This is never more important than when guarding the Spurs at the three-point line, since the team managed to throat-punch the Mavericks’ defense by hitting 43.3 percent during the regular season. They have it within their talents to turn around their defense and convert it into the weapon much needed to dismantle San Antonio, because, as everyone knows, nobody in the NBA is bulletproof.

Everyone can think that the “weak” Mavericks are the underdogs with their backs against the wall, but all the fire thrown in their direction by naysayers only makes them stronger. In fact, they welcome it – which means it’s probably a grand time for the Mavericks to consider changing their motto.