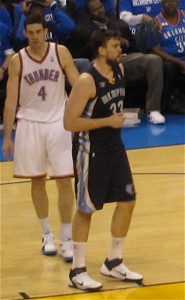 Yes, the Oklahoma City Thunder boast a couple of the best two-way players in the league in Kevin Durant and Russell Westbrook, as well as defensive dynamo, Serge Ibaka. Yes, this is a team which relishes every close game situation it faces, and usually prevails. Yes, the Thunder had every opportunity to take control down the stretch of Game 2 of their first round matchup against the Memphis Grizzlies. And yes, Oklahoma City has big championship aspirations in mind, starting with this year’s playoffs.

But no, the Thunder could not close out last night’s game in what was a 111-105 thriller that ended in victory for the Grizzlies.

Memphis played near-perfect basketball for a majority of this game, and their efficiency in shooting, rebounding, defending and executing down the stretch was championship caliber. They may be the seventh seed, but this is a team built for the playoffs. They cashed in a bucket nearly every time down the floor, and the swarming defense of Tony Allen on Kevin Durant allowed this team to force KD into some difficult shots.

Durant finished with 36 points, but that was not the story of this game. He did come up huge toward the end of regulation and through much of overtime, but Allen’s denial of any easy looks for Durant gave the Thunder headaches for much of this game. He didn’t look as comfortable with the ball as usual, and the perennial hand-in-face defense which Allen has always utilized, shaped numerous defensive stops for the Grizzlies, which translated into easy bucketry.

The Thunder needed more from their bench tonight, as only three players contributed double-digit scoring, even in this overtime contest. There was a clear gap in ball movement and assisted baskets in this game, as Memphis had far easier looks than Oklahoma City. For the Thunder to be as successful as they can and should be in these playoffs, the team’s offense can’t be so stagnant and individualized. With Durant locked down, relatively speaking, by Allen for much of the game, the Thunder lacked ball movement, which could have delivered the ball to him in easier positions. Instead, Westbrook and Ibaka were forced to settle for a number of mid-range jumpers that they knocked down with consistency, but not enough consistency to withstand Memphis’ offensive prowess.

Mike Conley’s running the point and dishing out stellar passes that translated into fully uncontested layups, three pointers and open jumpers, Memphis was unstoppable offensively. This team does not settle for anything but near-perfect looks at the basket, and it proved effective against a Thunder team that isn’t used to facing such effective high-low basketball. Mike Miller hit three wide open three-pointers, and Courtney Lee’s easy looks from mid- and long-range gave him 16 big points.

The Grizzlies were the better team in the second game of this first round matchup, but they aren’t the better team in the series yet. Even with all of Memphis’ efficiency and execution, the Thunder are still a far better team. With Kevin Durant scoring consistently and plentiful bench contribution, this Oklahoma City Thunder team should be able to bounce back and take this series over. Whether or not the Memphis Grizzlies will let them take over, however, is an entirely different story. While the Thunder are saying yes, the Grizzlies are saying no.