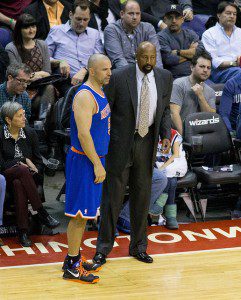 Phil Jackson’s first major move as Knicks president was a swift one: On Monday, New York fired coach Mike Woodson and his staff.

The Knicks finished 37-45 this season despite owning the NBA’s second-highest payroll as Carmelo Anthony missed the playoffs for the first time in his 11-year career. They also won 17 fewer games than the year before with essentially the same roster.

Jackson announced the move in a statement after meeting with Woodson on Monday morning, less than a week after the end of the regular season. Woodson had one year left on his contract.

“I have a tremendous amount of respect for Mike Woodson and his entire staff,” Jackson said. “The coaches and players on this team had an extremely difficult 2013-14 season, and blame should not be put on one individual. But the time has come for change throughout the franchise as we start the journey to assess and build this team for next season and beyond. Sports Illustrated

Mike Woodson was a lame duck coach with no authority in the organization. He also shoulders some blame for on-court issues like holding weird grudges against Iman Shumpert, refusing to change defensive schemes that rely on switching, and not adjusting the offense to much more than iso-ball featuring Melo and the Knickettes. The team was successful last year with the same coach at the helm so it’s not like Woodson is a clueless basketball mind. The Knicks added talent this year and became a worse team which will always yield bad offseason news for a coaching staff.

Woodson might receive another chance to be a head coach at the NBA level, but the prognosis for this sort of thing varies. Mike D’Antoni was let go as the Suns head coach, had a bad stint with the Knicks, and is having a worse time coaching the Lakers. Mike Brown was fired by the Cavaliers, booted out by the Lakers five games into his second regular season with the team, and re-hired by the Cavaliers. Mikes always get third chances. The strand for the first two was with the Lakers. There’s no way Woodson is the next Lakers’ coach, right?

Let us end with a reel of Mike Woodson’s most outstanding reactions to dumb plays by the Knicks over the last two years. I too will miss this.