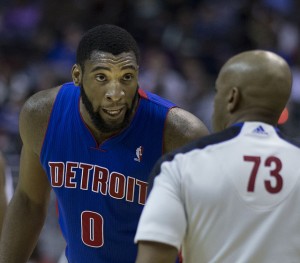 For the Detroit Pistons to turn the ship around in 2014-15, they first need to reset their team philosophy. They ranked in the middle of the pack or worse in every major statistical category other than rebounding. They can’t shoot. They can’t defend. Their coach was fired halfway through the season. Their team president and general manager just stepped down.

Filling those front office positions and hiring a new coach will go a long way toward turning the franchise around. But before they do anything, Detroit needs to take stock of the assets that they have.

Brandon Jennings, although a terrible shooter, is not a bad point guard and has a good eye for the game: he averaged the second-fewest turnovers per game of anyone averaging over 7.5 assists per contest. His contract is reasonable and he’s still only 24 years old. Josh Smith is a solid two-way player who struggled this season while playing mostly small forward rather than his normal power forward position. Andre Drummond and Greg Monroe emerged as a solid one-two punch in the post that should continue to develop and dominate for years to come. A couple of solid role players surfaced as well (Kyle Singler, Jonas Jerebko), and a couple of albatrosses are coming off the books (Charlie Villanueva, Rodney Stuckey), which should give them a little room to add a quality role player or two.

With the assets Detroit has, the answer to turning around their team is pretty clear. Rather than being a team that doesn’t play any defense and spends too much time trying to run a traditional offense in the halfcourt, Detroit needs to focus on funneling opposing offenses to their shot-blockers and run every chance they get.

On defense, the Pistons are huge down low and weak on the perimeter. But in today’s NBA, every team is focused on maximizing shots at the rim and three-pointers while minimizing mid-range jumpers. So why not depend on a zone that is designed to run teams off the three-point line and force them to either come inside where Drummond, Monroe, and Smith are waiting, or pull up and take the mid-range jumpers they don’t want to take? With a small point guard like Jennings on the perimeter, their best bet is to have him crowd opposing guards and give them no choice but to drive past. In doing so, they limit the number of threes they give up while maximizing the number of contested shots inside, inevitably leading to more blocks, and …

More fast breaks! Good defense leads to transition buckets, and the Pistons were built to dominate in transition. If you have Josh Smith and Andre Drummond running on the break with Brandon Jennings at the point, you should be running every single time down. Instead, Detroit was tied with the Portland Trail Blazers for the 11th-fastest pace this season; not bad, until you remember that Portland’s offense runs through forward LaMarcus Aldridge while Detroit’s runs through Jennings.

Detroit should be running as much as a Mike D’Antoni-coached team, albeit slightly modified to maximize inside shots. If they’re not finishing on the break, then they’re running a pick-and-roll with Jennings and Smith, or having Jennings do his best Steve Nash impression and maneuver inside the three-point line while his teammates constantly move and cut around him. Even if the set just calls for a post-up for one of the big men, there should still be constant movement. The reason: movement will overcompensate for any perceived lack of spacing due to having three post players in the starting lineup. If nothing else, it will keep Josh Smith off the three-point line, which is always a good thing. You can’t spot up for bricks if you’re too busy cutting to the basket.

Staying active on the interior will also open up even more offensive rebounding opportunities for a team that already does that well. Not only does that help them from an obvious offensive standpoint, it also helps their defense by preventing teams from leaking out on the fast break because they have to worry about getting the defensive rebound.

All that being said, none of this means anything if the Pistons don’t find the right coach that can get the players to buy into such a game plan. That’s the real challenge. Who can get Detroit to commit to defense, get Brandon Jennings and Josh Smith to stop shooting, and effectively turn this franchise around? If Detroit can answer that question, the rest will come a whole lot easier.