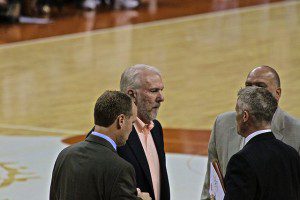 The San Antonio Spurs’ Gregg Popovich is the recipient of the Red Auerbach Trophy as the 2013-14 NBA Coach of the Year, the NBA announced today. Popovich’s Spurs posted the league’s best record at 62-20 (.756), which provides them with homecourt advantage throughout the postseason…

2013-14 marked the 15th consecutive season that Popovich’s Spurs posted 50 or more wins, and the fourth time in that span that the team tallied 60-plus victories. San Antonio recorded a 19-game winning streak — tied for fifth-longest in NBA history — between Feb. 26-April 2.

Popovich presided over a balanced roster which featured no player who averaged 20-plus points, nor 30-plus minutes, with Tony Parker’s 16.7 ppg and 29.4 mpg leading both categories. He ended the 2013-14 campaign with 967 regular season wins, good for ninth on the all-time list. NBA

A record of 62-20 is impressive during any regular season, particularly this season in the ultra-competitive in the Western Conference. Year after year, we expect the Spurs to finally be too old to remain among the elite teams yet they deft expectation every time. Popovich is given a lot of credit for managing minutes, but he has also cultivated talent well enough to allow that sort of rest for his players. I’m sure players over 3,000 minutes for the season such as Kevin Durant and LeBron James wished their coaches would lean toward a Popovich-esque approach in the future.

There were several viable candidates for this award but it went to the right coach. Popovich might retire once Tim Duncan calls it quits in the near future. We should appreciate his genius while we still have time to do so. – AL