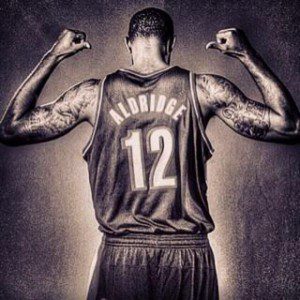 LaMarcus Aldridge has never been the sexy pick. Blake Griffin is a walking highlight reel and warms the ladies’ hearts with his quirky KIA commercials. Taco Bell’s Kevin Love is a rugged lumberjack that carries the T-wolves by his lonesome with his crisp outlet passes and massive rebounding numbers. The plastic man, Anthony Davis’ Foot Locker bag is filled with an NCAA championship, the first overall draft selection, an Olympic invite, and one of the most distinctive pieces of facial hair in the league, if not America.

Despite being in the league for longer than any of his All-Star colleagues, Aldridge is just that anonymous guy in the Northwest without any national commercial campaigns but with a sweet mid-range jumper. Despite the big man’s quiet demeanor, putting up 46/16 and 43/8 on the road in the playoffs is something you can’t ignore. NBA fans and Houston Rockets have been put on notice, and the Blazermaniacs in Portland will be girding their loins for the LaMarcus experience at the Rose Garden (what’s the Moda Center?) on Friday.

The LaMarcus experience is less visually stunning than some of his power forward counterparts but poise and skill are pretty riveting if you enjoy good basketball. Aldridge’s ability to remain consistent and calm throughout the game influenced the entire Portland team. The Blazers exuded an air of confidence on the way to a 112-105 win while the Rockets were skittish despite having two of the top 10 players in the league.

Dwight Howard had a huge first quarter with 19 points but tapered off due to foul trouble. Aldridge chugged along smoothly, jumper after jumper, 23 at the half, 39 after three, and 43 for the game. James Harden has been missing in action. He refused to pull up for the mid-range jumper even though the Blazers wouldn’t foul on his reckless attempts to get to the free-throw line. Damian Lillard struggled early as well but managed to get his teammates involved and impact the game by getting eight boards and 11 dimes supplement his 18 points. Poise is sexy and LMA and the Blazers have plenty of it.

The power forward spot typically isn’t thought of as a glamor position. Guys like LeBron James, Kevin Durant, and Carmelo Anthony are dynamic on the wing. Kyrie Irving, Steph Curry, and even Aldridge’s own teammate, Damian Lillard, are exciting point guards that you pay to see. Consistent mid-range jumpers don’t win fans but they can win championships: Aldridge is following in the footsteps of another seven-foot big man that was overlooked in his generation of power forwards. Dirk Nowitzki wasn’t as polarizing as Garnett, stoic as Duncan, or as versatile as C-Webb, but with a defensive center and a team full of shooters Dirk got to the promised land; maybe Aldridge can too. Until then, enjoy the show.