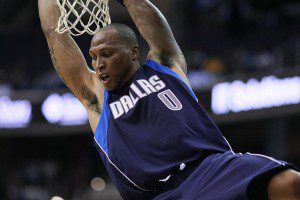 San Antonio Spurs head coach and iconic legend Gregg Popovich accepted his third NBA Coach of the Year achievement in a jubilant fashion… which is oddly horrifying for anyone who is familiar with Popovich’s dismal ways: “I know I’ve been very lucky for a good number of years, and I know full well that I just represent part of what goes on here,” he expressed to the media.

“Why can’t we give him coach of the century?” Dallas Mavericks’ head coach Rick Carlisle expressed. “I mean, he’s the greatest.”

Despite the honor bestowed upon one of the greatest basketball coaches to ever grace the court, Popovich witnessed with a dour, if not venomous, expression his top-seeded Spurs take a black and blue beating from the eighth-seeded Mavericks on their home turf during Game 2 of the first round of the playoffs. Though it didn’t appear that way at the start of the first quarter when Dallas appeared to be experiencing déjà vu within the first few minutes after the Spurs came out nailing five of seven shots while the Mavericks were just one of seven, trailing 11-4. Mavericks’ star Dirk Nowitzki was at a loss with his 0-for-5 shooting while Jose Calderon (who was thrust into the Mavs’ starting lineup) was 0-for-3. It was Monta Ellis who decided that it was time for a change, and charged in early, putting up six points to bring the Mavericks within one point (13-12) with 4:11 left in the 1st quarter, in order to give his team the confidence boost needed to ultimately close out the opening period, 24-23 after going on a 20-12 run.

Going into the second quarter, the Mavs were running high after turning nine San Antonio turnovers into 10 points. However, Dallas was given a scare after Nowitzki took a brutal looking slap to the right eye from Tiago Splitter, which put him on the bench for a couple minutes. The Mavericks appeared to find the mojo they so lacked during Game 1 of the first round, and took apart the Spurs, mainly profiting off their turnovers (Spurs, who average 14.4 turnovers per game, managed to execute 15 turnovers with 2:56 remaining within the first half of this specific game). Dallas closed the first half leading 56-41, after an intense 10-0 Spurs run.

This time, it would be the Dallas Mavericks who never bothered to look back after leaving the Spurs in the dust.

The Mavs led 81-69 with 2:42 remaining in the third after Calderon made three straight baskets. Dallas would lead 88-75 going into the fourth. The final quarter would be Dirk’s, proving how elite he is by putting his team ahead 97-76 with 8:54 left on the clock.

The Mavericks managed to give their fans a breath of fresh air by not blowing a massive lead, ultimately taking Game 2, 113-92 over the Spurs and snapping a 10-game losing streak against San Antonio. Ellis led the Mavs with 21 points, followed by Shawn Marion’s 20, Devin Harris’ 18 and Nowitzki’s 16. Manu Ginobili carried the Spurs on his back with 27 points, followed by Tony Parker’s 12 points and Tim Duncan’s 11.

Despite his honor, it’s doubtful that Popovich is too happy at this point in time.

The series heads back to Dallas for two games starting on Saturday.