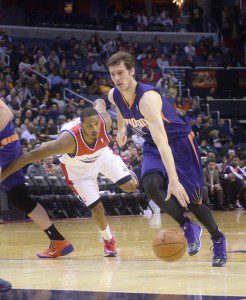 Baller Mind Frame’s No Layups brings you the hottest NBA stories on the web mixed with personal opinion from our very own Aaron Lanton
Goran Dragic, whose breakout season helped the Phoenix Suns make a remarkable transformation, has been named the NBA’s most improved player.

The Phoenix Suns narrowly missed the playoffs in a tough Western Conference. Nearly everyone expected the franchise to be among the league’s bottom feeders. The franchise became the darling of the NBA as they defied all odds, and showed what was possible even in a year that does not guarantee a playoff berth. Dragic was the embodiment of that realization by becoming one of the best guards in the league. He is an indispensable part of the team’s future, something only the most rabid Dragic supporter would have claimed before this season.

It’s unclear if the Suns will continue to build through the draft, or seek to contend next season, but they are in good hands at point guard for the rest of the decade. – AL