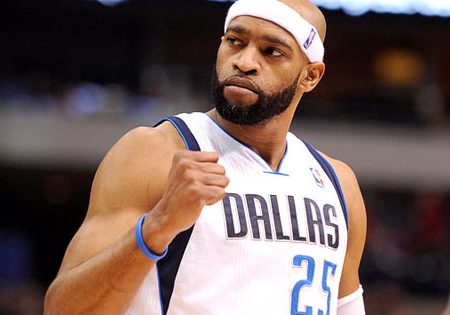 Flashback to Philadelphia, Eastern Conference Semifinals May 2001, Game 7. With his Toronto Raptors down 87-88 against the Philadelphia 76ers, a young Vince Carter stands on the three-point line, sweat drenching from his forehead, his team down by only one point with seconds remaining. Carter, who dominated Game 6 against Philly with his 39 points, eyes the basket and jumps in a desperate attempt to nail a basket inside the three-point line, letting the ball fly. “I survived,” Carter meekly said after the game. “I was there, I played, did what I needed to do. It all came down to one shot.”

The shot failed to fall and cost the Raptors the Eastern Conference championship.

Flash forward to April 26th, 2014 – the now veteran 37-year-old Carter stands in nearly the same position, his Dallas Mavericks’ hopes resting on his shoulders as he stands outside the three-point line. However, with 1.7 seconds remaining in game three of the Western Conference playoffs, his Mavericks down 108-106 to the top-seeded San Antonio Spurs, history failed to repeat itself as Carter didn’t even bother to think – the past being in the past – as he let the ball leave his fingers while leaning back, almost falling out of bounds, the buzzer sounding loudly in his ears…

Truth be told, skeptics didn’t favor Dallas to take this series – especially with their home record of 26-15 and 23-18 on the road during the 2013-14 regular season. Even NBA All-Star Dirk Nowitzki faltered. “I think we’ve been a decent road team all year, but at home we haven’t figured it out yet,” Nowitzki stated after their win on Wednesday. “I’m a little worried going home.”

Luckily, the Dallas Mavericks weren’t about to go into Game 3 with the same parochial outlook that the media and skeptics held, their saw-like teeth awaiting to pounce and sink into the necks of their talented nemesis. One key to their success? The fact that Holger Geschwinder, Nowitzki’s longtime mentor, was back in town after a short hiatus. And yes, it showed. Within the first few minutes of the game, Dirk opens up by nailing the first points of the game, quickly followed by teammate Jose Calderon and his first points. The imperturbable Mavericks were well on their way… or so they thought.

The Spurs, a team not known to quickly grab their ankles and surrender, came back with the help of veteran Tim Duncan, and closed an eight-point gap to tie the game at 16. It was both Duncan and Tony Parker who broke their backs carrying their team’s offense during the first, their clear-cut enmity for the boys in blue slightly showing in their faces. San Antonio would end up taking the initial quarter, 34-27, the media-favored team off to a 64-percent shooting start from the field while Dallas was at a, relatively, measly 50 percent, regardless of the fact that both teams were 3-for-10 from behind the arc. Carter wasn’t faring very well during the first half, as he attempted to shoot three-pointers too soon while the Spurs defense crept up. San Antonio had an answer for every shot Dallas made, as the latter attempted to defend their end of the court with barely little avail. The Mavs would close the first half leading 59-54.

It was a brand new game during the second half, with Calderon leading the way, giving his Mavericks the edge with a 63-56 lead with 9:39 left in the third. Calderon was clearly out to immolate the Spurs, shining during the game with his (so far) 16 points and seven assists. Though San Antonio wasn’t going to lay down, and their apparent benignant attitude was suppressed and their defense closed down both Monta Ellis and Carter as they missed four straight jumpers – all horrendous shots. The Spurs would only trail 77-74 heading into the fourth quarter.

This was a position Mavericks fans were all too familiar with – one they couldn’t stand.

The fourth quarter would be a power struggle on the three-point arc and in the paint, with San Antonio taking a tense 89-87 lead with 7:10 left. Despite Dallas’ energy and mixture of boldness and aggravation, it was the Spurs who managed to crack the 100-point barrier during the game as they went on a 9-1 run with minutes left to play. It would be Manu Ginobili, who appeared to have delivered the hammer on Dallas with a leaner over Sam Dalembert with only 1.7 seconds remaining.

Then, it was a brilliant blast of deja-vu – Carter was left open in the corner…

The San Antonio Spurs, who went into this series favored to win, would walk away from this particular game spinning with enmity from their Texas rivals, looking to bounce back with a win over Dallas on Monday.

But not if Vince Carter has anything to say about it.