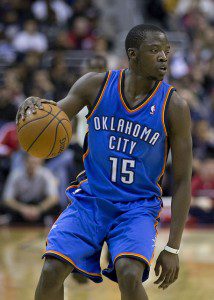 Through the first round playoff match up for the Oklahoma City Thunder, the team has lacked an asset that every great franchise holds inherent to its winning formula: for the Miami Heat it was Mike Miller, for the San Antonio Spurs it was Danny Green, for the Indiana Pacers it was Paul George. In every championship pursuit, every team within considerable contention has held a player who stepped up when his name was called and took over with his performance down the stretch.

In Game 4 against the Memphis Grizzlies, it was Reggie Jackson.

With 32 points and nine timely rebounds, he took the game over for the Thunder to even up the series in a 92-89 overtime win, which showed Kevin Durant without offensive prosperity. The Thunder needed a hero, and it was Jackson.

Jackson was coming off one of the worst stretches of his career, as he shot well under 20 percent in the playoffs before Game 4 of the series. When Scott Brooks checked him into the game early in the second quarter, an apparent presence was felt immediately and carried on throughout the full length of the game with Jackson attacking the Grizzlies’ defense with every ounce of his will to get his team some needed points.

The Memphis Grizzlies are sound defensively, with the ability to lock down superstar scorers through the defense of Tony Allen, and can provide help on opposing bigs with Marc Gasol’s inside presence. When the Grizzlies put Mike Conley or any other guard on Jackson, who could not be stopped, the defense fell apart as he was able to push up OKC’s lead to 13 before the final quarter and gave glimpses of the Game 1 beating the Thunder served the Grizzlies.

As only Memphis knows how to do, however, a surge through much of the fourth quarter in which Oklahoma City could not buy a basket brought the game closer until eventually an overtime period came about that made me wonder whether or not there was any way in hell this series could get any more entertaining.

And believe me, it did.

Reggie Jackson did it all in the late runnings of this match up. His offensive boards were immeasurably valuable to his team as the second chance buckets it created took time off the clock as Memphis tried to grip and claw its way back to no avail. From his three-pointer late in the game to the energy he brought onto the floor, this kid stepped up in a way only the greats do in moments of importance. This game puts the Thunder in a very good place moving forward.

Mike Conley, conversely, may have seen too many touches of the basketball. While he’s an overwhelmingly underrated player who boasts ridiculous handles and prestigious passing, Conley’s touches need to be limited while in the presence of Marc Gasol. Easier looks have always been the name of the game for Memphis, and it seems that this team only shoots fully open shots when Gasol is set in the post dishing to his teammates. Better offense seems to be created when the ball is in his hands, and the Thunder took advantage of possessions which displayed Conley showing off his handle rather than building his offense effectively.

As the Thunder head to Chesapeake Energy Arena for Game 5, it appears that any difficulties and troubles the team may have seen have been mostly addressed, as the pace at which this game ran made life for the Grizzlies immensely difficult. It showed through in Game 4, as the Thunder evened the series at two apiece to set the stage for an exciting finish.