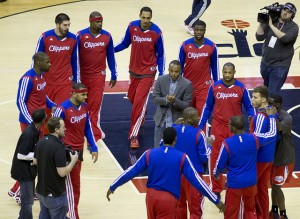 No one knew how they would respond in wake of Tuesday afternoon’s big news, but the Los Angeles Clippers did so mightily with a 113-103 win over the Golden State Warriors, grabbing a crucial 3-2 series edge. After hearing the great news that their owner would receive a lifetime ban from the NBA, it’s as if all of the weight was lifted from the Clippers shoulders—and rightfully so.

The Staples Center was packed for the biggest day in Clippers franchise history. They witnessed the new best show in LA move to within a single game of the Western Conference semifinals. Led by DeAndre Jordan and Chris Paul, who both had poor Game 4s, they Clips were able to do just enough to keep Golden State’s high-powered offense from catching fire.

Jordan made up for Blake Griffin’s slow start and foul troubles by scoring 25 points and collecting 18 rebounds. The Warriors had no answer for him, even attempting the old “Hack-a-Jordan” late in the game. But DeAndre still managed to make them pay from the line. This series has really shown the progression of Jordan’s offensive game. Thanks to coach Doc Rivers, he is no longer just a rebounder and shot blocker, but a scoring threat that you can’t afford to disregard on defense.

Paul scored 20 points, many coming late, dished seven assists, and grabbed six rebounds. But most importantly, he absolutely shut down Stephen Curry and ruined any resemblance of his fellow All-Star. Paul embarrassed his counterpart, forcing Curry to commit eight of the Warriors’ 13 turnovers. What’s even worse, Curry only managed to get up 10 shot attempts and dish out four assists. In what was one of the biggest games of his career, he was a flat out disappointment.

Klay Thompson was the high scorer for the Warriors with 21 points and both David Lee and Andre Iguodala had 18 apiece. But the real story was Golden State’s bench’s lack of scoring, or ability to do anything productive for that matter. Their lackluster, sorry excuse for a bench combined for just 19 points. To put things into perspective, Jamal Crawford scored 19 by himself off of the bench for the Clippers. Those numbers simply will not win ball games.

The other issue for Golden State was the foul disparity. Los Angeles went to the line 41 times, the Warriors just 19. And at only 10-of-26 shooting from long range, the Dubs characteristically died by the three. Thompson and Curry were a combined 7-of-14 from beyond the arc, the rest of the team was just 3-of-12. But what was most disturbing was Curry’s awful, sloppy, uncoordinated, difficult-to-even-watch play. And why he took so few shots will never make much sense.

The frustrating game from Curry and the Warriors could not have come at a worse time. Teams that have won Game 5 to take a 3-2 lead have gone on to win the series 142 out of the 171 times. That’s a whopping 83 percent. While Game 6 is back home at Oracle, it’s still not very good news for the Warriors.

The Clippers are just the better team, plain and simple. Better coaching, better point guard, better big men, and a much, much deeper, more experienced bench. And here’s something that no one ever expected to hear: the Clippers are also the tougher team. All of Mark Jackson’s boxing references have worn out their welcome—the Warriors lack both heart and toughness. Outside of Draymond Green, the corpse of Jermaine O’Neal, and surprisingly, Klay Thompson, they play soft, passive, sloppy basketball that lacks any sense of urgency or rhythmic flow. When your best offensive player, who is arguably the best shooter on this planet or any other, only takes 10 shots in the biggest game of the season, you deserve to lose.

The Clippers have all but sealed the deal in this series and are already making celebratory party plans on Thursday night in the Bay Area.