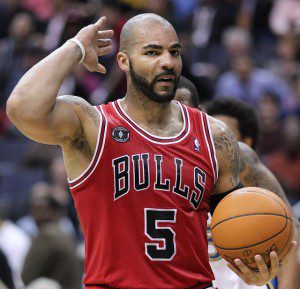 But here’s the thing: You continue to hear rumbles that Bulls chairman Jerry Reinsdorf is adamantly against the idea of setting Carlos Boozer free via amnesty, even though the 32-year-old is finally poised to enter the final year of his contract, valued in 2014-15 at $16.8 million.

Sources briefed on Chicago’s thinking say the Bulls are going to do everything they can to try to find a trading partner for Boozer before seriously considering the amnesty option.

Bear in mind that Chicago essentially has until July 15 to craft a deal that finds a new home for Boozer after a season in which he lost much of his fourth-quarter run to Taj Gibson. The NBA’s amnesty window this summer runs through July 10-16. ESPN

Boozer remains a productive player. He averaged 13.7 PPG and 8.3 RPG despite reduced minutes. The problem is that Tom Thibodeau doesn’t like playing Boozer during important moments in games because of his consistently porous defense. His contract has been an issue among Bulls’ fans for a while, but it appears the Bulls will only let go of Boozer via trade. This affects a possible Carmelo Anthony signing because the Bulls would have to give up assets to sign Anthony to a max deal; however, Phil Jackson, the Knicks’ president of basketball operations, despises Reinsdorf  so a sign and trade between the Knicks and Bulls is highly unlikely.