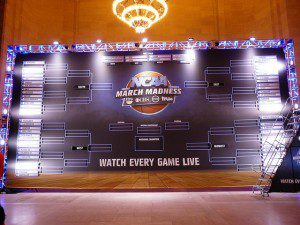 When it comes to upsets in the men’s NCAA college basketball tournament, aka March Madness, I’m not surprised. We watch March Madness with the anticipation of the upset. In fact, I would be surprised if one didn’t occur.

During the NCAA tournament, we all expect to see the small college take down a basketball powerhouse; you can almost guarantee a 12th seeded team beating a 5th seeded in the opening round. It’s one of the main reasons people watch.

The 2014 NBA playoffs are becoming reminiscent of the NCAA tournament with all the close games and buzzer beaters. The first round playoffs are the most exciting they’ve been in years. But as the old adage goes, “there is nothing new under the Sun, everything has already been done.” Since the NBA went to a 16-team playoff system in 1984, the 8th seed has beaten the 1-seed five times. And with the exception of the Miami Heat winning all four of their games, each of the other first round series’ lower seeds have all won at least one game on the road, and are either tied or are leading the series to date.

Fans seem so surprised that this is a highly competitive playoff season. Who would have thought that the top-seeded Pacers would be in the middle of a monumental meltdown versus the Atlanta Hawks? The Hawks are now up 3-2 with the series heading back to Atlanta

Top-seeded San Antonio Spurs were down 2-1 to the Dallas Mavericks, after a Game 3, Vince Carter buzzer-beater. But have now tied the series 2-2.

Despite playing without suspended forward, Nene Hilario in Game 4, the Washington Wizards take a 3-1 series lead against the Chicago Bulls.

The Toronto Raptors and the Brooklyn Nets series are tied 2-2.

The Los Angeles Clippers, under a cloud of controversy brought on by racial comments made by Clipper Owner, Donald Sterling, are tied 2-2 with the Golden State Warriors.

The Oklahoma City Thunder and the Memphis Grizzles series have included three straight overtime games and are tied 2-2.

Finally, the Houston Rockets are down 3-1 in a series that had 2 overtime wins by the Portland Trail Blazers, and back-to-back 40-point games by LaMarcus Aldridge.

Teams compete for the best record in regular season to have the home court advantage in the playoffs. However, in 2014, the Eastern and Western Conference top seeds have played themselves into a disadvantage. The Indiana Pacers and possibly the San Antonio Spurs are in jeopardy of not advancing to the next round. Now if that happens, that would be really surprising.