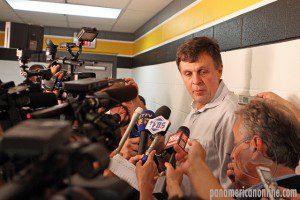 Kevin McHale will return as the Rockets coach for next season, a person with knowledge of the decision said today.

McHale just completed the final guaranteed season of his contract, but multiple individuals with knowledge of the Rockets thinking have said management believes in him and wants him to have more time with a relatively new team that spent the season battling injuries.

The fourth year of McHale’s contract was subject to a team option but it appears the Rockets are sticking with him. Houston Chronicle

Firing McHale after an insane buzz beating loss would have been impulsive and unwarranted. The Rockets did get beyond the first round but they did play well. Western Conference playoff teams in particular should not be held to the same standards this season because every series has been played at an elite level. However, I want to return to a point I made last month about the Rockets’ championship aspirations this season after the team surrendered 51 points to Corey Brewer:

The Houston Rockets are incapable of winning a championship this year. Period. The Rockets’ performance is indefensible JUST LIKE COREY FREAKING BREWER LAST NIGHT.

This is a basketball travesty. Not because Corey Brewer scored 51 points, but the way they happened is ludicrous. It’s almost nothing but unchallenged layups from turnovers because the guards can’t handle basic defensive pressure. Conventional wisdom suggests a team should defend a player on a hot streak. At least have someone shadow the dude or something.

The Rockets’ defense was head-scratchingly hideous in the playoff series against the Portland Trailblazers. Here’s James Harden giving up a layup and literally scratching his head in confusion.

Harden and other players in the backcourt lost the series for the team by committing a ridiculous amount of turnovers (this includes just being ripped clean by defenders one on one), and giving up uncontested layups when their assignment ran to the basket. Dwight Howard is an amazing defender but he can only so much.

This also showed up on the final play of the series that allowed Lillard to get off a clean look for the series winning shot.

This is a coaching problem. It took the Rockets three games to slow down LaMarcus Aldridge at all, but they never alleviated the real problem which was giving up clean three point looks and “gimme” layups.

McHale deserves another chance but he needs to be held accountable for consistent, atrocious basketball decisions on defense. Players do stupid stuff but it’s on the coach when it’s a lingering issue. – AL