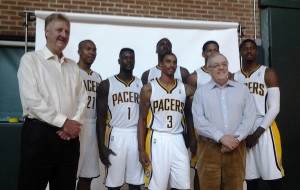 The Indiana Pacers advanced to the second round with a 92-80 win over the Atlanta Hawks in game seven.

If the Pacers go on to win it all, they will have a pesky Hawks team thank considering the last time the Hawks were an eight seed they pushed the 2007-08 Boston Celtics to seven games as well. Those Celtics went on to become NBA champions. Indiana is hoping they will get the same result now that they have finally advanced to the second round to take on a well-rested Washington Wizards squad.

After a fairly even first quarter, the Pacers opened up an 11-point lead in the second quarter and basically held  on until the final buzzer. Once the Hawks fell behind, it appeared as if they became desperate as they hoisted up a playoff-record 44 three-point attempts. The gag was they only made 11 of them. Hawks point guard, Jeff Teague, who had been so instrumental to coach Mike Budenholzer’s system kind of fizzled out in the end as he only mustered up 16 points  and three assists.

While the Hawks were struggling to score, Paul George had the time of his life as he lead the Pacers with 30 points. Lance Stephenson also had a great game, finishing up with a double-double of 19 points and 14 rebounds. Another key to Indy’s finally clinching was a rare Roy Hibbert siting. The big man put up 13 points, snagged 7 rebounds and 5 blocks as well. It was the performance Pacer fans had been expecting all along from the 7’2″ big man.

The Atlanta Hawks have nothing to be ashamed of, Paul Milsap noted after the game that many people felt as if the Hawks had overachieved but he felt as if they did not achieve enough. He may have a valid point given the rash of injuries they dealt with throughout the season and the permanent loss of Al Horford. Atlanta will have some issues to address as far as their current roster’s contracts and the free agency market. Nevertheless, the Hawks have a great future ahead of them.

Meanwhile, Indiana moves on to face an extremely talented Washington Wizards squad who dispatched of the Chicago Bulls in five games. Hibbert will have to show up for this series as Washington’s Nene will be a force to be reckoned with. They will also have to tangled with one of the most overlooked backcourts in the league in John Wall and Bradley Beal. Considering the trouble the Pacers had with Jeff Teague, they may be in over their heads with the Wizards guards.