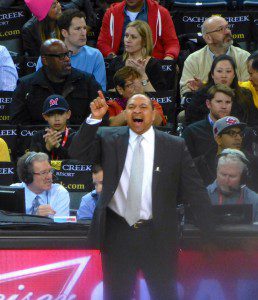 The possibility of reaching out to the Chicago Bulls for permission to speak with coach Tom Thibodeau will also be a consideration, league sources said.

The Warriors will likely move quickly to reach out to Kerr, who has strong relationships with owner Joe Lacob and president Rick Welts, league sources said.

Kerr’s preference is to advance into negotiations with New York president Phil Jackson on coaching the Knicks, sources said, but he hasn’t ruled out discussing the Warriors’ opening.

The Warriors also have interest in Iowa State’s Fred Hoiberg, but he’s been consistent in saying he wants to remain in college for the near future.

Nevertheless, the Warriors have a deeply talented roster that makes this an attractive job. Yahoo Sports

The more we learn about Mark’s Jackson’s departure, the more clear it becomes that his firing was about issues off the court between the coaching staff and front office. Employees must acquiesce to the pecking order and Jackson did not.

The job is not very attractive at the moment. The roster needs changes but the team lacks flexibility to do so. The formidable frontcourt of David Lee and Andrew Bogut are never on the court together because of various injuries although they are the two highest paid players on the team. Andre Iguodala, the third highest paid player on the team, was acquired in a sign and trade last offseason that gave away the Warriors’ last assets while also stunting the growth of the budding Harrison Barnes. Barnes is the only legitimate trade chip, tragic yet true.

Someone credible will take the job even with these limitations but it’s not a great gig. This is not a championship roster and the Western Conference is only going to improve. Sounds like another job for Mike D’Antoni.

Last week, I told @JaredZwerling that I don’t think D’Antoni would have resigned from #Lakers without something cooking. Keep an eye on GSW. — Moke Hamilton (@MokeHamilton) May 6, 2014

Obviously, D’Antoni is no defensive stalwart, but if the Dubs fired Jax, they may buy into the “offensive genius” gimmick. — Moke Hamilton (@MokeHamilton) May 6, 2014

At this point, nothing would surprise me. – AL