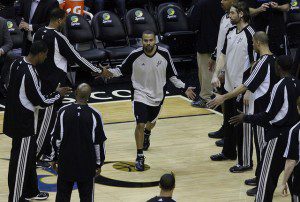 If there’s any advice that needs to be given upon newcomers visiting the South, other than the obvious “learn to play the banjo in case you’re challenged to a duel,” it would be “know your rivalries”. The Texas versus Oklahoma rivalry is a humongous one, fueled by a feverish rush of esurient animosity. From the time they’re born, Texans are marked by a strong tendency to be in a constant state of anger when it comes to their neighbors of the North. This hatred stems from the Red River Rivalry, which is when the Oklahoma Sooners football team faces the Texas Longhorns every year during the fall. This particular rivalry dates back to the year 1900, when the teams first faced-off and Texas pulverized the Sooners 28-2. So needless to say, Texas has it out for Oklahoma, and gleefully looked forward to facing the Oklahoma City Thunder in the Western Conference Finals. Regardless of being considered the stronger of the two teams, the San Antonio Spurs couldn’t afford to underestimate a team that swept them 4-0 during the regular season and have managed to win 10 out of 12 games dating back to the 2012 Western Conference Finals, a team who is younger, and a team who has MVP Kevin Durant in their arsenal.

But none of that mattered Monday night.

Ignoring the ghost of OKC’s Serge Ibaka, the Spurs attacked the lane and dominated nearly the entire game. Old geezer Tim Duncan danced all over the paint in the first and had 8 points on 4-of-5 shooting that helped put his team up 14-7 over OKC with 6:50 left on the clock. By the close of the quarter, the Spurs had a 30-27 lead over the Thunder and were shooting 58% from the field. By the second quarter, it was clear that the Spurs strategy was “when all else fails, just pass it to Duncan” which appeared to be extremely affective, despite the looming threat of Durant, Russell Westbrook, and Derek Fisher, the latter putting up 11 points in the first half. San Antonio outscored OKC 38-14 late in the second as the visiting team started to sink into the giant hole left by the injured Ibaka. Spurs led 67-59 going into the locker room after the first half.

Despite a hiccup in their defense that would allow Westbrook and Durant to put a combination of 17 points in the 3rd in order to give OKC a one-point lead, the Spurs quickly rallied back and went on a 12-2 run on order to lead 89-82 going into the fourth. It was all Tony Parker and Kawhi Leonard in the final quarter as their Spurs penetrated their final thrust to drive the win home. San Antonio would take Game 1 from OKC, 122-105.