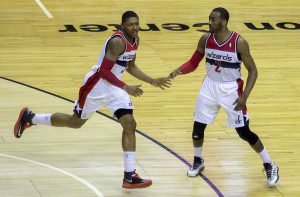 After a 44-win season that encompassed a second-round playoff visit, the Washington Wizards were one of the biggest success stories of the 2013-14 NBA season. Led by the “House of Guards” tandem of John Wall and Bradley Beal, the Wizards emerged as one of the young up-and-coming teams in the league with great potential for the future.

But just how good can the Wizards be, specifically as soon as next season? Before we answer that question, some things have to initially happen before the start of the 2014-15 run.

First, the Wizards must re-sign their veteran starters, Marcin Gortat and Trevor Ariza. Gortat and Ariza were big pieces to a successful Wizards puzzle this season. Gortat was a double-double threat every night, while Ariza was one of the best three-point shooters in the league. They each were solid one-on-one defenders as well. They will command a lot of attention on the open market this offseason, but the Wizards brass, at least initially, seem eager to re-sign the two vets.

The second thing that must happen is the continued development of the two best players in John Wall and Bradley Beal. Each had career years, as John Wall averaged career highs in points and assists per game, which led to his first All-Star game appearance. Bradley Beal had a solid sophomore campaign, averaging 17 points per game and taking on the role as closer for the team. As the season went along, Beal started getting heavy comparisons to the great Ray Allen because of his pure shooting form and touch. Wizards fans should be excited that Beal is being compared to arguably the greatest shooter of all time in Jesus Shuttlesworth.

If the Wiz re-sign Gortat and Ariza, and their backcourt continues to get better, the team will assuredly be back in the playoffs. Once they get there, though, a lot will hinge on the teams that accompany them.

The big question going into next season will be who their competition is in the Eastern Conference. With guys like LeBron James, Carmelo Anthony, and Kevin Love possibly on the move, those three players alone could shift the balance of power in the East, which could either bump the Wizards slightly up, or bump them slightly down. Either way, the fans should expect to see their team in the postseason for years to come.

Nobody expected the Wizards to emerge as a possible contender in the Eastern Conference this year. They took the top-seeded Indiana Pacers to six games in the second round, and they could have very well won that series if they had better execution towards the end of some of those games. With a year of experience under the belts of Wall and Beal, they should be primed for a run at least as long as the one this year.

The only thing that the Wizards can really control is how they play. Wall and Beal will be a year better, and they should be equipped to handle certain situations with more poise. While the team won 44 games this season, they lost several close games during the regular season in which they had leads late in the game. With another year of experience playing together, some of those losses will translate into wins next season. Also, Wall and Beal should be better prepared to handle the pressure of the playoffs even more effectively than they did their first time around.

A realistic prediction for the WizKids next season is around 48-50 wins, and a second round playoff appearance. Depending on what happens in free agency this offseason, a deeper run in the playoffs would not be shocking at all.