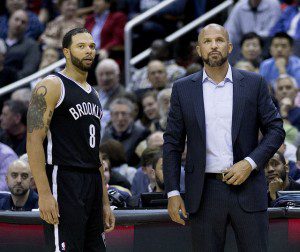 Nets point guard Deron Williams will have surgery on both of his troublesome ankles, the team said Thursday.

Dr. Martin O’Malley, who is scheduled to perform the operations Tuesday, said Williams would have a bone chip removed from his right ankle and have an arthroscopy to remove spurs from the front and back of his left one. O’Malley, the team’s foot and ankle specialist, said Williams would make a full recovery.

The procedures, while relatively minor, are just the latest development in a struggle that has lasted years for Williams, 29. He signed a $98.8 million contract in 2012, but his tenure with the Nets has been marred by frequent injuries…

Williams missed 18 games this season because of injuries. His health will be closely watched before next season, particularly because Brook Lopez, the team’s center, is recovering from injuries. New York Times

The Nets current roster situation seems bleak at first glance but it’s probably not as bad as it seems. Shaun Livingston and Paul Pierce could leave in free agency but will probably be overpaid enough to remain with the team. Kevin Garnett is unable to produce consistently but will come back to get his guaranteed $12 million. The good news is that Joe Johnson will stick around, and Brook Lopez is expected to fully recover from his season ending foot injury (although that says nothing about the likelihood of Lopez hurting himself again). The biggest question mark is Deron Williams.

Williams has been a complete disappointment. There’s no way to sugarcoat this fact. Not only is he not performing to expectations, but he is outright not showing up at times including scoring zero points in Game 2 of the East Conference Semifinals versus the Miami Heat. That’s not acceptable from a guy once considered an elite player. Jason Kidd was hired as Nets’ head coach because it was widely assumed he would get the most out of Williams’ play, a goal that has not yet been fulfilled. Rumors have swirled about trading Williams but no one wants his bloated contract and inconsistent play. It’s a mess from every possible angle.

Isiah Thomas and other Hall of Famers have gone on record saying that Williams is a great system player, but has difficulty affecting games when asked to run offenses outside of his comfort zone. They might be right. Time has not run out for Williams to turn things around. He’s very capable and injuries have been a significant factor. Mikhail Prokhorov should just buy out the Warriors’ training staff since they have protected Stephen Curry’s ankles so well. One more big purchase won’t hurt. – AL