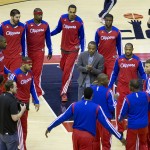 Disgraced Los Angeles Clippers owner Donald Sterling has agreed to allow his wife, Shelly, to negotiate a forced sale of the team, sources with knowledge of the situation told ESPN.

Shelly Sterling and her lawyers have been negotiating with the NBA since her husband was banned for life by commissioner Adam Silver on April 29. While the league has yet to formally accept this arrangement, sources said if she is willing to sell the team in its entirety, this could bring a startlingly quick end to what appeared to be a protracted legal battle.

Shelly Sterling does intend to sell the Clippers, however it’s remains unclear how much of a share — if not all — she’s willing to sell, according to a source with knowledge of the situation. Sources said the only way the NBA would accept the terms of this agreement between Donald Sterling and his wife would be if the team was sold in its entirety. ESPN.com