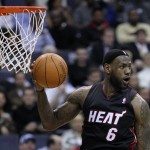 A reporter asked LeBron James how he had been able to avoid answering questions about free agency this time around, as Anthony couldn’t seem to do the same. Long pause….Smile. “See me?” James said. “I don’t talk about it.” Was it easier because the Heat were winning? “No, it’s easier that I’m in Miami, and he’s in New York,” James said. “New York media [are] a little bit different than Miami [media]. You guys don’t take no for answer. So…I don’t have to deal with that.”

He said that with a touch of smugness, and it led to some snickering from the Gotham press corps, as well as a recoil from this reporter, since it came off like a suggestion that South Florida reporters were soft. Maybe we are. Or maybe we just realized, once James clearly set the terms at the start of training camp, that there wasn’t much point to daily poking and prodding. Browbeating would lead to silence and stonewalling and thus, nowhere.  Bleacher Report