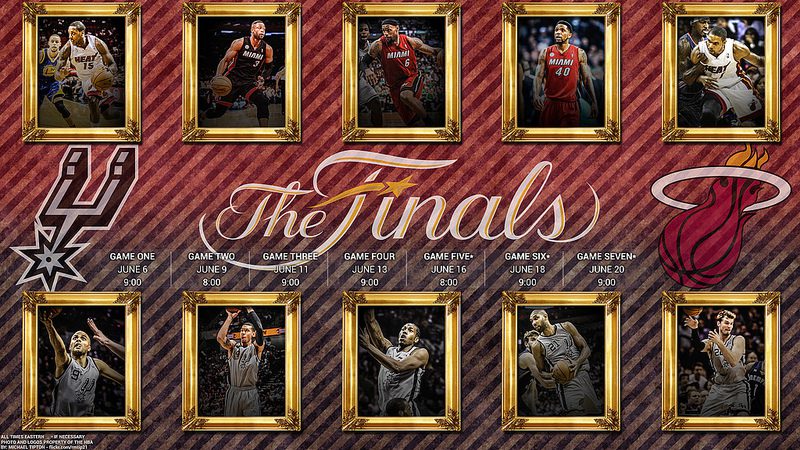 In a rematch of last year’s Finals, the defending champion Miami Heat will square off against the veteran San Antonio Spurs in the 2014 NBA Finals.The two teams have the same core as last season but of course there will be some major differences in this series. Let’s preview this matchup and try to predict which team will hold the advantage in each sector.

So what’s so different this season?

One other significant change is that this will be the first time since 1985 that the NBA Finals format will not use the 2-3-2 format. This year, the series will follow the 2-2-1-1-1 format, which is the one used for all regular playoff series. Although there were some questions about how much a 2-3-2 benefited the team with the home court advantage, the current format seems to be the best one for an NBA Finals series.

The two teams split their regular season series at one win apiece, with each team winning at home. The average victory margin was 18 points, while neither team’s Big 3 played in the two regular season matchups.

This could be the last chance for the San Antonio Spurs to win the NBA Championship under this core. Tim Duncan is 38 years old and Manu Ginobili is 36. After the Spurs lost the championship last year, both were rumored to consider retirement.

However, this could be the last chance for the Miami Heat to win a championship. Each of the Big 3 holds the option to not return to South Beach next season, although it’s considered probable that LeBron James, Dwyane Wade, and Chris Bosh will stay united in Miami for at least one more season.

The last time we saw an NBA Finals rematch came back in 1998, when the Chicago Bulls defeated the Utah Jazz for the second time in a row.

There is no question that the most important matchup, the one that could decide the outcome of the series, is the one between LeBron James and Kawhi Leonard. There is no one in this league capable of effectively containing LeBron. However, Leonard proved last season that he can do a decent job matching against the world’s best basketball player.

Leonard has already proved that he is an emerging star, but due to the presence of Tony Parker, Manu Ginobili, and Tim Duncan, he doesn’t get much credit for his contributions. However, Leonard could be a key factor for the Spurs in this series, on both ends of the floor.

Both teams look lethal but also almost evenly matched. Tony Parker is the main piece around which the Spurs construct their offense. His recent ankle injury should certainly alert Gregg Popovich, who should be ready to adjust his rotations if Parker is not 100 percent. The latest news states that Parker will most probably be ready and active for Game 1, Thursday night in San Antonio.

Wade is playing as well as he ever did over the last couple of seasons. He is very effective with his shooting and he is even hitting threes. The 32-year-old megastar has been slowed by his knee injuries over the last couple of seasons but at present he seems to be fully ready to contribute for Miami. Wade wins the race against his opponent at the starting shooting guard role, Danny Green.

In the battle in the paint, the Heat should be very careful to not allow the Spurs to dominate. Chris Bosh and Chris Andersen did a great job containing the Indiana Pacers’ big men and hopefully they can continue to do so in the NBA Finals. We still don’t know who will be the starting power forward for Miami. Maybe Erik Spoelstra decides to change his lineup after a game or two. Shane Battier or Udonis Haslem will most probably get the call. The Spurs hold the size advantage in their frontline but Bosh shouldn’t be underestimated. He can make clutch plays and make the difference in this series. After all, it was Bosh who grabbed that super crucial rebound and then kicked out to Ray Allen who hit a season-saving three in Game 6 last year.

Now, this is when things become interesting. The Spurs are a team that utilizes all their weapons and their full depth. Boris Diaw, Manu Ginobili, Patty Mills, and Marco Belinelli can make the difference in this series. The bench has been very productive for San Antonio throughout the season and Gregg Popovich will continue to utilize his reserves.

However, we, as well as the entire San Antonio Spurs team, remember what the Heat’s bench can do. Miami’s bench does not look as dangerous as last year, but don’t be surprised if you see players like Ray Allen, Norris Cole, or even Chris Andersen and Shane Battier making momentum- or game-changing plays.

After what was one of the most competitive NBA playoffs in league history, especially in the first round, we should now all get ready for an exciting NBA Finals matchup between the league’s top two teams. Let the best one win the Larry O’Brien Trophy.