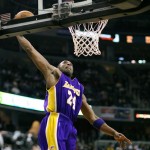 Smush Parker made an appearance on Highly Questionable with Dan Le Batard recently and was asked about Kobe. Although Smush was clearly tired of the subject, he did say the following about the five-time NBA champion:

“He told me one day at practice — I tried to talk to him outside of basketball about football. And he looked at me in practice and was dead serious and said, ‘You can’t talk to me. You need more accolades under your belt before you come talk to me.”

Obviously, Parker isn’t a fan of Kobe. Parker has called the experience of playing alongside Kobe in Los Angeles “overrated” on more than one occasion and hasn’t changed his stance over the years. Lakers Nation