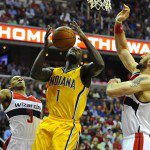 He’s [Lance Stephenson] a difficult personality. Executives on some teams with the requisite cap room recoil in horror at the very mention of his name. Teams with minor burbling locker-room discontent are hesitant to toss in another volatile personality. Stephenson’s embarrassing antics in the Eastern Conference finals inflamed the perception of him as a rogue loon whose “personality” will nearly cancel out all the good he might do on the floor. And the question lying just underneath those (legitimate) concerns: What happens when a guy who should be on his best behavior in pursuit of his first giant NBA paycheck actually gets that paycheck? Grantland