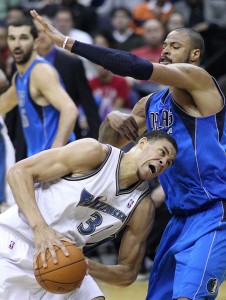 In the game of chess, key components have a plethora of moving parts, and it’s important to think ahead. Always picture what will occur later down the road, at least a few moves ahead, in order to protect the King (take a wild guess on who that is). This is what Dallas Mavericks fans hope (pray!) that their front office is in the process of doing with this particular offseason trade.

Wednesday afternoon, the Mavericks finalized a trade that would send veterans Jose Calderon, Samuel Dalembert, Wayne Ellington, and former first-round draft pick Shane Larkin to the New York Knicks for the very familiar Tyson Chandler and Raymond Felton. Now, if that was all, it would be not only doable, but agreeable (excluding the part that, yes, Dallas fans are heartbroken by the departure of Calderon, but are beyond jubilant at the return of Chandler).

However, the deal didn’t end there. The Mavs also gave up their second round picks in the 2014 NBA draft this Thursday. Yes – both the 34th and the 51st pick along with the young Larkin. Yes, this did affect that tent that Mavericks fans pitch at the thought of Chandler’s return.

Looking five moves ahead, we will skip to July 1st.

Carmelo Anthony, the popular Knicks forward who also has decided to become a free agent, has also made the decision to not only visit the Chicago Bulls and the Houston Rockets, but also the Mavericks – the new (old) home of his BFF Chandler. Coincidence? Perhaps, but you never want to underestimate the moves of Mavericks owner Mark Cuban, who is well known for his shark tank-like antics and strategic chess moves. He wants another win for his boys. He wants another win for the aging Dirk Nowitzki. Fort Worth’s Star-Telegram Mavericks beat writer Dwain Price asked his Twitter followers to imagine what the starting line-up for the Mavericks would look like during the 2014-15 season if this scenario became a reality: Nowitzki, Chandler, Anthony, Felton and Monta Ellis.

Remember – this was the only team that gave the Champion San Antonio Spurs a run for their money by pushing them to seven games during the first round of the NBA playoffs. There are certain, ahem, players who are forgoing dollar signs in order to break apart from their current team and pair up with other brilliant players in order to put their handprints all over the Larry O’Brien Championship Trophy. It’s possible that certain free agents will be looking to the Mavericks in order to make their dreams become a reality.

Now about those draft picks; this did come as a shock since most believe they could have obtained Chandler and Felton in the trade without giving up the picks. The thing is, the front office isn’t looking to surround their prismatic players, like All-Star Nowitzki, with newbies. You want to protect the king with versatile pieces – all of whom are familiar with the checkered pattern on the board. A king who is still powerful enough to win another championship. At this point, the Mavs have $26 million in cap room (which will drop probably around $10 million once they re-sign Nowitzki), which means they have some coin to spend on another huge free agent. But someone like Anthony and – dare I say it – LeBron James will cost more. Cost more in the sense of cutting some pretty big pieces of the Mavericks’ surefire arsenal.

With the future uncertain, it’s hard to foresee whether this particular chess move will determine the entire game.