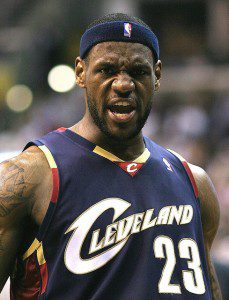 I dreamt about LeBron James.

Vivid, in color and at the daïs of his press conference announcing his return to Miami. He said, “There’s no other place I’d rather be, and any ideas otherwise are complete nonsense.”

Every morning I listen to the Zaslow and Joy Show on Miami’s sports radio station The Ticket. As I make the 15 minute drive to boxing class I’m serenaded with both personalities belittling, mocking and expressing utter exhaustion at “LeBron Watch.” Their main targets are Brian Windhorst (the Windy Center montages are pretty funny) and often Zaslow muses that Chris Broussard “peaked years ago.” I’m not a Heat fan; the Lakers are the team I’ll forever hate the most, but Miami is a close second due to the Pat Riley connection and the “I can’t beat you so I’ll join you” nature of how the last four editions were constructed.

I actively root for the Heat to lose which sometimes renders me unpopular in my own home. Yes, I live with a Heat fan.

I believe this should act as a disclaimer for the statement to follow:

LeBron James is returning to Miami because there’s absolutely nothing logical that indicates he’s leaving.

Would it be funny if James jilted Miami the way he did Cleveland in order to go back to the Cavaliers? Absolutely – watching the mental implosions by hordes of nouveau-Heat fans excites me the way seeing the Lakers fans and players’ faces when the Celtics erased the massive deficit in Game 4 of the 2008 Finals did. It’s not going to happen. I’ll simply fulfill my thirst for schadenfreude by looking at the Lakers’ current roster construction or watching highlights of the San Antonio Spurs eviscerating the Heatles.

So why would James come back? Dwyane Wade had 42 million reasons, Chris Bosh now has 88 million reasons, and even Udonis Haslem had 4 million reasons. How would James face these guys after they opted out of their deals? Wade may get taken care of by the Heat, Bosh has the Rockets offer, but Haslem? Haslem is a tough dude, and there’s no way he’d give up $4 million unless he was going to get rewarded some other way – possibly with an assurance of James plying his trade on Brickell. James has influence over the front office and he’s partners with Erik Spoelstra (watch the Heat huddles, notice that James, Wade and Bosh are never listening to Spoelstra’s instructions as if there’s a plan for the Big 3 and the Rest of the Guys). Riley’s signings of Josh McRoberts and Danny Granger provide space for James on the floor, and there’s also the small matter of drafting Shabazz Napier. James’ public adoration of Napier was never lost on the nefarious Riley even though he tried to deflect and blame the media for putting out knowledge about the Heat’s interest in UConn’s point guard.

Those are just the organizational reasons for choosing Miami.

James is the coldest mercenary around if he leaves and Wade, Bosh and Haslem have opted-out of close to $100 million in collective guaranteed money because he gave them indications about the plan to retool. Michael Jordan famously emasculated Kwame Brown in his time with the Wizards; Jordan’s viciousness in pursuit of glory is slowly becoming greater public knowledge. James has never exhibited that level of sadistic behavior. Is James guilty of bad judgment regarding “The Decision?” Absolutely – something he’s alluded to a few times these past years. James can be accused of narcissism – he did nickname himself “King James” and his body is tattooed with the phrase “The Chosen One.” He’s a man that doesn’t say anything interesting or provocative for most of his career, then starts to organize team responses to the controversy of the moment, be it the Trayvon Martin murder or Donald Sterling’s racism. His public persona reveals no trace of viciousness or sadism – for him to deceive his teammates enough so that they opted-out of guaranteed millions runs counter to who he is publicly.

These are just the character reasons.

Finally – why Cleveland? Dan LeBatard muses on his eponymous radio show about how people yearn to be home. James’ house is in Akron, Ohio; many of his family and friends still reside in the Buckeye State. The life in Ohio and Miami couldn’t be more different (I’m from New York and currently live in Florida – trust me on this). Imagine waking up on January 12, looking out your window and seeing a bright sun in a blue sky speckled with tufts of white clouds. Then go outside in a cut-off shirt and shorts, walking barefoot through bright green grass past lemon, lime, orange and mango trees bearing ripe, luscious fruit. Suddenly you hear the distinctive whirr of the air conditioning unit, a reminder the temperature is in the mid-70’s and your thermostat is set just below. Put that vision next to Akron on the same date. There’s also the matter of Florida’s lack of a state income tax. Floridian take-home pay always exceeds the same salary paid in other states.

These are just environmental reasons.

Deeper reasons would also rule out James taking his talents to the Cuyahoga. James’ character was indicted by Cavs owner Dan Gilbert. Maybe what Gilbert said was true, regardless it’s in bad form to air grievances so publicly, so bluntly. At the end of the day, a man has to live with himself regardless of how much money he’s earned and how accomplished he is professionally. Gilbert’s letter intended to emasculate James – no self-respecting man would willingly return to the employ of someone who publicly disparaged him. James gracefully chose to abstain from a public response. Privately, if he’s a man of any character (which I suspect he is), Gilbert is persona-non-grata.

These are just masculine reasons.

Yet the rationale above informs none of the speculation.

The coverage of James’ decision reflects none of the above logic. Broussard recently said on Sportscenter that there’s an 85 percent chance James returns to Cleveland. Based on what? Sources? What are their names? Of course these sources are anonymous! The easiest thing for reporters to fall back on is the idea of the anonymous source. The shadowy figures whose existence some reporters owe their careers to are the equivalent of pulling a slot machine. There may be a pull yielding a jackpot, but those are few and far between – Woodward and Bernstein only had one Deep Throat. Broussard is staking his reputation to these anonymous sources and being paraded on Sportscenter like an expert. What does he know that any of us don’t? He’s unwilling to name these sources, which is good journalistic practice, but at the same time his credibility is lacking; all he’s doing is speculating based on the opinions of people who do not wish to be named. Windhorst operates similarly – he prognosticates (he made reference on Sportscenter to reading tea leaves) then chides the audience for being whipped up in the frenzy he created. ESPN is willing to parade reporters across their sets armed with nothing but speculation. Reporters such as Broussard and Windhorst are a misnomer. They report nothing.

That’s not to say ESPN doesn’t contribute to the NBA fan’s understanding of front office machinations. Tom Penn has done a wonderful job explaining economics of James’ arrival at various franchises. This information is vital to us basketball fans looking to gain understanding of why teams can pursue players beyond the arbitrary statements like, “they have cap room.” Unfortunately, Penn appears on Sportscenter half the time as Windhorst and Broussard. This is tragic. Penn’s inclusion allows the NBA fan an educated and informed opinion. Conversation on message boards will always contain ad hominem attacks bereft of informational content – results of statements made based on anonymous sources and speculation. The more interesting and pertinent opinions come from people like Penn. Broussard and Windhorst fill time between baseball highlights and Sportscenter anchors detailing the latest NFL player arrested.

Ultimately, James will make the best decision for him and his family based on factors beyond our understanding (how many of us are elite basketball players with the world at our feet?) and without our input. For the second time during a World Cup cycle fans breathlessly hit the refresh button on web browsers. People need to be patient, it’s time to realize the Chinese maxim “empty barrels make the most noise” applies to the loudest voices prognosticating and that it’s ultimately a fool’s errand – if James doesn’t stay in Miami his decision will defy every level of logic.