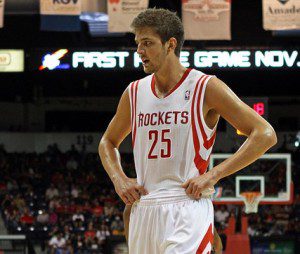 Payback is certainly a bitch.

For the past week, the tension between the front offices of the Dallas Mavericks and the Houston Rockets has run rapid, each squandering to one-up the other in a battle worthy enough to make Napoleon Bonaparte cringe. Houston’s personalized Waterloo came Sunday afternoon when they announced they would not match the three-year, $46 million dollar offer sheet to restricted free-agent Chandler Parsons. When the white flag was raised, the city of Dallas drew in a collective sigh of relief – not only for the fact that they would be obtaining a small forward who averaged 16.6 points, 5.5 rebounds, and four assists last season, but also for the fact that the free agency was nearly picked clean and the Mavs’ plan b-through-negative-z had been swiped. Given, it was reported on Wednesday morning that Dallas had a back-up plan in the form of Lance Stephenson and would have joined the Mavericks on a 2-year, $20 million dollar deal had Houston kept Parsons. Nevertheless, it was the 6’9, 25-year old they heavily coveted, and eventually won in a thrilling (er… nerve wracking) game of chicken that came down to the wire (or six hours close to the wire, since Houston didn’t wait until the very last minute to bow out).

It certainly wasn’t Mavericks’ owner Mark Cuban’s “intention” to make Rockets general manager Daryl Morey’s life an absolute living hell for the past week. However, it must have sent a gleeful tingle down Cuban’s spine to know that Morey must have been seething over the fact that images of Parsons and Cuban partying in a dimly lit club after signing the offer sheet went viral. Last summer, in a facetious attempt to irritate Cuban, Morey sent a text message to the owner inquiring about a deal for All-Star Dirk Nowitzki after Houston managed to land Dwight Howard (who had waved off Dallas’ desire to acquire him and his talents). “That’s fine,” Cuban huffed last year, “but payback is a bitch.”

According to Isaac Newton’s third law of motion, “For every action there is an equal and opposite reaction,” so when LeBron James tossed the pebble in the water by announcing that he was returning to his Cleveland roots, the ripple effect began and Morey’s offseason started to swiftly unravel. LeBron’s departure was supposed to be a seemingly positive aspect for Houston, since they were looking to pursue James’ former Miami teammate Chris Bosh, but the picturesque image suddenly flashed crimson when, after trading Jeremy Lin to the Los Angeles Lakers in order to create cap space, Bosh decided to stay with the Heat at the eleventh hour. Because of this particular move, Houston started clambering on the floor for another suitable star before eventually signing Trevor Ariza. The stars started to align in Dallas (a rare feat for them during the offseason) when Houston announced that they wouldn’t be matching on the boyishly good-looking Parsons (who looks suspiciously like a cartoon pilot). Cuban had got his man.

It’s understood that Parsons bestowing his lily-white youth upon a team stacked unfathomable talent will certainly have a positive bearing on both the team and their entire franchise. Whispers among the media and diehard fans of the Mavericks casually note of an iridescent franchise that is looking to make Parsons the face of Dallas once their beloved Nowitzki retires. It must also be pointed out that the latter of the pair selflessly took five million less in his initial deal in order to help facilitate relocating Parsons AFTER both the Rockets and the Lakers offered him max deals, a move that shows true class of a man dedicated to his team, his love of the game, and his fan base.

The Mavericks have been playing a game of risk these past few months, which appears to be paying off big time, and are quickly filling in the Jose Calderon shaped gaps left by great veteran players who were traded (you will be missed, Vince Carter. Possibly you too, Shawn Marion). Their most recent addition of Miami’s Rashard Lewis appears to be a low-risk back up for Dirk, and will join Richard Jefferson – both of whom are expected to sign for the league minimum – on the bench. The Mavs still have their $2.7 million in cap space to use, and are looking to go after a plethora of other vets including Portland’s Mo Williams (who, as a Dallas resident during the offseason, would love to play for the city he lives in) and ex-Maverick Jason Terry, who currently plays for the Sacramento Kings.

With their recent additions, it’s plain to see that the Mavs will be a team to fear in the West come next season. No more underestimating the boys in blue.