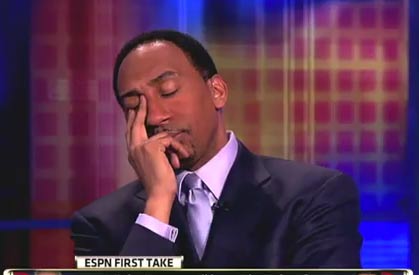 Sometimes, when talented men hop onto a soap box, an extraordinarily abundant amount of douche can cascade from their lips and drip-drop into the grains of history. Thanks, social media! They just can’t help themselves – when you’re on a rant, sometimes you can’t put the metaphoric brakes on the microscopic-witted words that form and fall. This word vomit can make a relatively smart man, armed with a certain heap of celebrity, look like a tall bundle of dumbass.

On February 15, 2014, Ray Rice, a Baltimore Ravens running back and a guy I’d pick last on the waiver wire in fantasy football if I was overly desperate, took it upon himself to go medieval on then fiancée, Janay Palmer, by punching her unconscious in a casino elevator in Atlantic City. Rice, known off the field as a heavy advocate for anti-bullying among children, sundered his reputation in one swift hook. But apparently not with the NFL, who, quite meekly, only suspended Rice for the first two games of the 2014-2015 season. It’s lovely that the National Football League cares that little about women in general to rain such a disgustingly minuscule punishment down on player… oh, that’s right. I forgot that the great and powerful Oz… er, NFL Commissioner Roger Goodell… cares about dollar signs (Concussions? What concussions?). That’s a big fat “my bad.”

This has tragically become common in the sports world with athletes thinking they’re above the law and simply do whatever the hell they want. However, we’ll skip over that fact and fast forward to the morning of Friday, July 25th when First Take television host Stephen A. Smith (in the middle of a conversation with Captain McDickface himself, Skip Bayless) let the word vomit fly:

“We know you have no business putting your hands on a woman. I don’t know how many times I got to reiterate that. But as a man who was raised by women, see I know what I’m going to do if somebody touches a female member of my family. I know what I’m going to do, I know what my boys are going to do. I know what, I’m going to have to remind myself that I work for the Worldwide Leader, I’m going to have to get law enforcement officials involved because of what I’m going to be tempted to do. But what I’ve tried to employ the female members of my family, some of who you all met and talked to and what have you, is that again, and this what, I’ve done this all my life, let’s make sure we don’t do anything to provoke wrong actions, because if I come, or somebody else come, whether it’s law enforcement officials, your brother or the fellas that you know, if we come after somebody has put their hands on you, it doesn’t negate the fact that they already put their hands on you. So let’s try to make sure that we can do our part in making sure that that doesn’t happen.”

Meh? Did you just say what I think you said? That women should watch the way we act in order not to provoke such an act? Quick! Back track!

“Now you got some dudes that are just horrible and they’re going to do it anyway, and there’s never an excuse to put your hands on a woman. But domestic violence or whatever the case may be, with men putting their hands on women, is obviously a very real, real issue in our society. And I think that just talking about what guys shouldn’t do, we got to also make sure that you can do your part to do whatever you can do to make, to try to make sure it doesn’t happen. We know they’re wrong. We know they’re criminals. We know they probably deserve to be in jail. In Ray Rice’s case, he probably deserves more than a two-game suspension which we both acknowledged. But at the same time, we also have to make sure that we learn as much as we can about elements of provocation. Not that there’s real provocation, but the elements of provocation, you got to make sure that you address them, because we’ve got to do is do what we can to try to prevent the situation from happening in any way. And I don’t think that’s broached enough, is all I’m saying. No point of blame.”

As a sportswriter, I raise an eyebrow at this comment. As a person who has a vagina, I cringe. As a human being, I’m disgusted. My question is, what does a man consider provoking? It could be a plethora of things ranging from a thrown fist to simply breathing, depending on the tormentor. The last time a dick-hat threw a punch at me, I was eleven and just accidently nailed him in the head with a rogue soccer ball on accident. I laid him out with a kick to the crotch. I’m not sorry. When I was twenty-two, a film producer that I had expressed no interest in, cornered me when I was alone in the production hall and attempted to sexually assault me. I nailed him with a stun-gun and pushed him down the stairs. Again, I’m not sorry.

According to Mr. Smith, I should have done my part in both instances not to have provoked these males. With the first, I should have pivoted with my left foot instead of my right so as not to send the ball in the general direction of his head. With the second, I shouldn’t have worn a skirt or mascara around him. I have never once had a boyfriend or male friend lay a hand on me in an aggressive manner. I have had words vividly tossed at me by them (one phrase, muttered by an intoxicated ex-boyfriend after getting into a football argument, which I’ll never forget since it prompted my sports career: “You have no idea what you’re talking about. I’m gonna go talk to a man about this now.”) but nothing that a lightning quick one-liner couldn’t take care of. I have witnessed domestic violence on numerous occasions, one particular case from the front row when a close childhood friend decided to marry a man who beat her several times and once even raped her. After the fog of a black-and-blue afternoon had faded, she took him back and informed me that she “provoked it.” Apparently, she had provoked him by cussing out of turn, which prompted him to kick her out of the car, at eight months pregnant, in order to waddle the three-mile journey home on a 100+ degree Los Angeles day. According to Smith, she should have “watched herself” and simply not cuss out of turn.

Rest assured that probably after his segment on First Take, Smith probably went to go bang his head against a wall, immersed in pitiful regret.

But hey, don’t feel sorry for the wall since it most likely provoked him by simply existing.