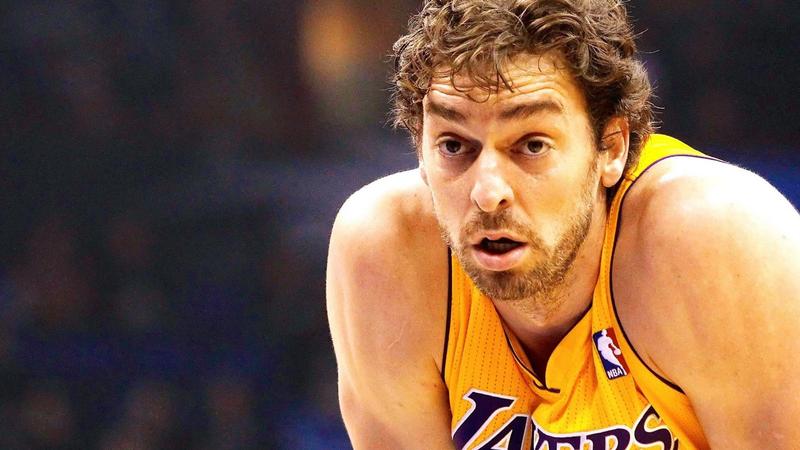 I don’t typically condone acknowledging either of the two men who were prominently involved with ESPN’s program First Take from 2012 through early 2016, but it’s impossible to mention Pau Gasol without mentioning the fact that he was traded from the Memphis Grizzlies to the Los Angeles Lakers in the middle of the 2007-08 season, and it’s equally impossible to bring up that trade without mentioning that Kwame Brown was involved in the trade, and it’s even more impossible to mention Kwame Brown without embedding this particular YouTube clip starring the lesser of the two First Take evils, Stephen A. Smith:

Nine years later this clip is still terrific for laughs, but more importantly it also represents the turning point in the career of Pau Gasol and how the collective basketball fanbase moved forward in consuming, considering and appreciating the Spaniard.

First of all, you need to remember that this was a trade that changed the trajectory of the decade to follow in the NBA. It’s awfully easy to point to this very move and say that if it didn’t happen, the 2008, 2009 and 2010 NBA Finals don’t include the Lakers, and the “Grit and Grind” Memphis Grizzlies are never a thing. And who knows what other chain of events this move set off. Maybe if Pau never gets traded there’s a bizarre butterfly effect where LeBron ends up a Laker, the Big Three Celtics three-peat, Steph Curry goes to New York in the ’09 Draft instead of Golden State and Harden stays in Oklahoma City. I don’t know, I’m getting way off topic.

So yeah, the trade obviously impacted Pau Gasol more than anyone else since he was indeed the centerpiece of it, and had he not been moved for a handful of the Lakers scraps he would have spent the next three years wasting his prime in Memphis on a rebuilding team before he had the chance to make his way to a team in contention. Before the trade in February 2008, Gasol was viewed as a perfectly fine big man, albeit a different type than we were accustomed to seeing go to work on the block. Pau was supremely skilled and savvy in the low post as both a scorer and a passer. He wasn’t aggressively banging bodies and getting into it mid-game with his peers; Pau went about his business in a overly professional manner, rarely making noise or rocking the boat; he just went about getting his 20 points and nine rebounds as smoothly as possible.

Pau carried the Griz to the Playoffs three times but the franchise failed to win a single postseason game until after he was a Laker. After three consecutive 1st Round sweeps there was a growing belief that a team carried by Pau Gasol was one that was incapable of doing something remotely close to contending for a championship … he was simply too soft and too polite to play with a fire that could lead to one of those eff-you do-or-die Playoff games. This, in part, was a true assessment of Gasol. Even though Pau was/is as skilled as a post scorer as any big man on this list, he didn’t have it in his DNA to carry a team the same way most guys ahead of him on the list have been able to. I sound so much like someone on a First Take panel talking about a players DNA, but sometimes those kinds of assumptions are true. Sometimes you need someone to bring that fire out in you and help you to be able to maximize every gift you’ve been given.

Enter Kobe Bryant; an all-time great scorer, competitor, and winner, though someone who is rarely considered a high quality “teammate.” The greatest counter any Kobe fan could make in response to that assertion would point directly to the bizarre relationship he and Pau Gasol had on and off the court. No teammate got closer to forming a human relationship with Kobe than Pau has, which is a testament to the type of person he is, and the type of player he is. If Pau were as soft as people claimed, or at all overrated in any way, Kobe would have chewed him up and spit him out. He never would have came to Pau’s defense when the Lakers were dangling him as trade bait for the majority of his final three seasons in Los Angeles.

Now sure, Kobe chewed into Pau from time to time, but that was just par for the course. As far as we know Pau never got it on the same level that guys like Smush Parker or Kwame Brown did. Kobe’s respect for Pau was tangible; there’s no way Pau would have been such a key figure late in games in so many Lakers wins if Kobe didn’t trust him and fully understand what he was capable of doing with the ball in his hands. Pau could ruin any defender that was matched up against him even if he was sleepwalking through a game. With a fire lit under his ass it turned into artful devastation; a steady assault of ambidextrous jump hooks, mid-range jumpers, timely put-backs and textbook post moves/countermoves. 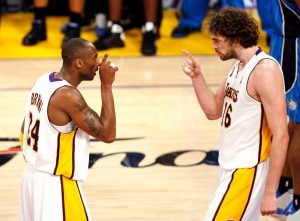 There’s no question that Kobe is largely responsible for Pau’s career being as successful as it was, but Kobe is almost just as fortunate that the Lakers were able to acquire Pau for cents on the dollar just weeks before the deadline in 2008. The big Spaniard was the running mate that Kobe had needed ever since Shaq was traded after the Lakers lost in the ’04 Finals; without him there’s no guarantee that Kobe would have gotten his fourth and fifth rings. Pau was an always reliable second scoring option in LA and he brought it in all of the Lakers’ deep postseason runs. In the 2009 Finals Pau averaged 19 points and 9 rebounds per game and shot 60% from the field. The following year Pau averaged 19 points, 12 boards and 4 assists per game in the Finals, and capped the series off with a gritty 19 point, 18 rebound (nine offensive) performance in Game 7. Pau was so good in that Game 7 it should have put the notion of him being soft to rest forever.

Naturally, it didn’t. Fans and analysts alike would continue to critique Gasol, and the Lakers appreciation for him decreased as time went by. In 2014 Gasol signed with the Bulls after years on the trade block in LA. Even though conventional wisdom said that the aging Gasol would soon run out of gas, he continued to put up the same sort of numbers he did in his prime. Per 36 minutes, Pau’s two seasons as a Bull were his best statistically.

Pau enters the 2016-17 season as a 36 year-old playing for his fourth team. It’s hard to fathom that Gasol can continue to produce at this rate much longer, but I’m not ready to count him out. Pau has spent the last fifteen years establishing himself as someone who competes hard and plays beautiful basketball. San Antonio sounds like the perfect place for Gasol to finish his career, and I would imagine that Pau will have at least one more relevant basketball moment before he decides to hang em up.