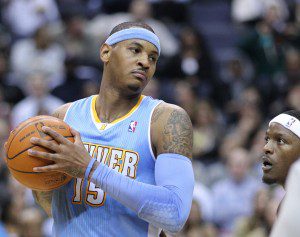 That season was a perfect microcosm of Anthony’s early career. He led the Denver Nuggets to 50 wins, which was tied for the third-best franchise record since they joined the NBA in 1976. Just like in years prior, because of the power in the West, the Nuggets would end up with a low seed and face a first round opponent that would end up in the NBA Finals: The Los Angeles Lakers. That makes three of five years such an occurence would taunt Anthony.

They are still the only 50-win team to be saddled with an eight seed.

The Cleveland Cavaliers won 45 games that season, but because they were in the East, they nabbed the fourth seed, which is where the Nuggets would have been since only three teams in the East won 50 games as opposed to all eight in the Western Conference.

So again, LeBron James was matched up against the Washington Wizards in the first round and dismissed in the second round – to be fair, by the Boston Celtics who would go on to beat the Lakers in the Finals that year.

So in their five years in the NBA, Anthony had made the playoffs twice in years where LeBron did not, and faced the San Antonio Spurs (twice) and Los Angeles Lakers (once) in the first round.

When talking about those early years and first round flameouts we are giving credit to James for beating Gilbert Arenas and DeSean Stevenson (in a year where his win total would have been five games shy of making the playoffs in the other conference), while holding it against Carmelo Anthony that he couldn’t topple two of the greatest dynasties in NBA history.

And let’s not kid ourselves that Lebron and others somehow earned the right to be playing weaker first-round (and second round) opponents. We have seen with this season — when the Cavs ended with a lower record and a higher seed while playing more games against weaker competition — and example of how Eastern Conference teams have often been rewarded for being not as good.

James had the narrative behind him that he had made it all the way to the NBA Finals, but he had a total of zero wins against Western Conference opponents. Other than his Finals appearance season, he had missed the playoffs twice, defeated the Wizards twice and that’s it.

If ever there was a perfect case study for why the NBA should open playoff seeding to overall records regardless of conference, Anthony’s early career in the powerhouse West would be it, and the 2007-08 50-win eight-seed team would be Exhibit A.

If several other star players had careers playing the exact same opponents, they would have been losing as well. But by luck of being either drafted into the East (James, Dwyane Wade, Dwight Howard), or by being younger and missing the days when both the Spurs and the Lakers – along with those Dallas Mavericks and Phoenix Suns teams – were dominant (Kevin Durant, James Harden, Stephen Curry), they aren’t held to the same standards.

The other player that most pundits put easily ahead of Anthony these days made his rookie debut that season. Durant led the Seattle Supersonics (remember them?) to a 20-62 record. Quite a far cry from Melo being the scoring leader on a playoff team his rookie season, but it probably helped Durant’s cause in the long-term because the bad record would help them land Russell Westbrook, a sidekick the quality of which Anthony has not known to this day.

Without Westbrook, that Sonics team lost a game to the Allen Iverson-Anthony Nuggets 168 to 116 … in regulation.

In this season, Anthony had a 49-point game (then a career-high) against the Wizards on 76 percent shooting which is the highest field goal percentage by anyone not named Kobe Bryant to take at least 25 shots in a game.

Anthony had career-highs (or matched career-highs) that season in rebounding, steals and blocks, and his second highest career mark in assists. He played a much more well-rounded game that season as the team worked to incorporate Iverson more, and it was hard to argue with only the third 50-win season in team history.

I still maintain that this Nuggets team was better than it ever got credit for and was merely a victim of an insanely good West at that particular moment in NBA history. It’s hard to argue against the way they folded in a sweep at the hands of the Lakers. They could have performed much better, but I think that Lakers team was destined for the Finals anyway.

The narrative surrounding the team would have been much different if this loss had occurred in a Conference Finals, but alas, the winds of destiny oft journey in confounding directions.

If NBA playoff seeding made any sense, the narrative surrounding Anthony’s career would be monumentally altered.

Enough people viewed that first-round exit, which at that time just felt like another in a long series, as reason enough to declare the Iverson experiment a failure. Three games into the following season he was traded for Chauncey Billup,s and the year of “post hoc, ergo propter hoc” was born.

Anthony would finally get his team out of the first round and take them as deep into the playoffs as they have ever been. And the media and the fans – both nationally and locally – rushed to give the credit to anybody but Carmelo Anthony.

Join us soon for Part 5: The Myth of Mr. Big Shot.