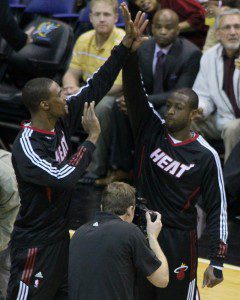 After completing some crucial offseason moves, the Miami Heat now look forward to life without the King. Despite the key additions they’ve made, it won’t make them early favorites. But with this decent lineup, how many games will the Heat win in 2014-15?

Looking at advanced stats, the Miami Heat will be losing 15.9 win shares next season with the departure of LeBron James. That’s how valuable the King was to them.

To replace James, the Heat brought in Luol Deng, with a career average of 5.5 win shares in 11 NBA seasons. Last season, he had just 4.5 win shares. Even during the Chicago Bulls’ 62-win season in 2010-11, Deng’s total win shares was just 9.9. That was also the last season in which he played 82 regular season games.

Let’s take a look at the 2013-14 win shares of the significant different players on the Heat’s roster compared to next year’s roster, as per basketball-reference.com:

Theoretically, that’s a difference of 10.2 wins from last season to next season, although you can’t really be accurate in saying that Deng, McRoberts, and Granger will do just the same with the Heat next season.

Also, notice that the four players that Miami lost this offseason are their main three-point gunners. That is going to be another problem for coach Erik Spoelstra.

Miami was 14th in the NBA in three-point field goals made per game last season at 8.1. The top six teams in the Western Conference, and seven of the eight playoff teams, had at least the same number of three-point makes per game as the Heat did last season.

Here are the players whom the Heat lost this offseason, along with their three-point makes per game average:

Here are the 2014 three-point stats from the new players:

Losing those five snipers meant losing 74.1 percent of last season’s three-pointers. While the replacements have decent averages from three-point distance, it’s not just merely the difference of three three-point shots per game here.

Except for LeBron, the four guys were spot-up shooters who just sat at their favorite corners and drilled long bombs. Deng, McRoberts, and Granger can do the same though, but unlike the four Heat outcasts who were pure shooters, they aren’t just designated shooters.

There is another key three-point shooting stat to look at. Luol Deng’s three-point field goal percentage has been consistently declining in the last seven seasons, with the lowest at 30.2 percent last year. This unreliability makes us question if he can consistently hit the three ball given the fact that he’s got big shoes to fill, not Just LeBron’s but Ray Allen’s as well.

There are exceptions though, like the Memphis Grizzlies, Indiana Pacers, and Chicago Bulls, who were all in the bottom 10 in three-point shooting, but are successful because of their defensive prowess. The Heat weren’t really a top defending team last season. Losing LeBron, who is an ace defender, won’t help that cause.

Read this excerpt from a report at HuffingtonPost.com on May 22, 2014:

While the Heat still score at an elite level — its 55.4 percent effective field goal percentages tops the NBA — the team ranked a pedestrian 15th in opponent field goal percentage this season. They also surrendered over 36 percent from downtown, one of only two playoff teams to do so. And for the first time during Miami’s Big 3 era, the Heat did not rank in the top five of opponent field goal percentage this year. Naturally, we can point to the perimeter as the reason why, but Miami’s lack of a shot-blocker in the paint has been the main factor contributing to its porous defense. Greg Oden has been oft-injured and Chris Andersen always gives a spark, albeit in limited minutes. But for all the razzle-dazzle star power, the Heat simply do not have a Roy Hibbert protecting their basket. The result is fearless drives to the hoop followed by easy kick-outs for clean looks.

The Heat were ranked 11th overall in defensive efficiency by allowing 102.9 points per 100 possessions. The three other NBA teams that made the Conference Finals were among the top five in that category.

Miami was the fourth participant in the NBA’s final four, despite being outside the top 10 in defensive efficiency and being last in the entire NBA in rebounding (27th in rebounding rate and 18th in shot blocks).

Why was that? As stated in the quote above, they shot the ball well last season, but as we saw in the Finals, when that offense sputtered, it spelled doom.

If we compare the Heat to the San Antonio Spurs, Oklahoma City Thunder, and Indiana Pacers, they do not have a rim protector. Other defensive teams like Chicago and Memphis also have rim protectors that anchor their defense. Miami doesn’t have one. And with all the player movement during the offseason, the Heat failed to add one.

What made Miami’s defense excel last season was LeBron James, plain and simple. James had the highest defensive win shares on the team at 3.7. This was not only because of LeBron’s 6.6 rebounds and 1.5 steals per game, but it was more because of his ability to defend players in multiple positions. James’ size and versatility made him the defensive anchor in Miami, but with him gone, they obviously must turn to Chris Bosh.

Bosh was second on the team in defensive win shares last season at 3.4. That being said, in the last two years Bosh has been relegated into a stretch 4, especially with his three-point shooting. If only he could revert to the pure power forward CB4 who was a more dominant defender, Miami would certainly have an anchor. However as Bosh said, via ESPN.com on July 13, 2014:

“CB4 is never coming back,” Bosh said, referring to his nickname as a Raptor. “A few years later, I think I’m a much better player. It’s funny, even all the way over here in Africa, people are telling me, ‘We need CB4 back.’ I can’t be that. That’s impossible. But I feel I’m a much better leader and a much better player, and I’m much more prepared for the role, the all-around role, that they need me to fill.”

Bosh averaged 9.2 rebounds and 1.2 blocks per game in Toronto. He’s averaged 7.4 rebounds and 1.0 blocks per game in his first four seasons in Miami. There isn’t much difference in his shot blocking, but the decrease in his rebounding average can be attributed to the difference in offensive rebounding, which was 2.7 in Toronto and 1.6 in Miami. Again, Bosh has become an outside threat in his evolution, and that has almost eliminated his offensive rebounding.

Bosh probably feels he is a much better player because he’s expanded his shooting range. That’s true, but he’s given up his defensive stats to do that.

“No doubt we lost a great player,” Riley said of losing James. “I don’t get hurt. … The hurt didn’t last long. We picked up the phone and went to work. Sometimes, things happen that you don’t like, but you have to move on. I feel really good about where we are right now at this moment. I feel we are up to the challenge and will be as competitive as anyone in the Eastern Conference.”

Yes, the Heat still have a competitive team, but they won’t be title favorites.

Contenders? For the playoffs, yes. For the Eastern Conference Finals, maybe not.

Chicago, Cleveland, and Washington look better. The sorry Pacers just lost Paul George to injury, so they may be out of contention. Realistically, the Heat will be in the top four in the Eastern Conference because that side of the NBA remains the weaker one.

As to wins, a 50-win season should be the target, but a borderline 45-48 wins will probably be enough for this team. Remember they only won 54 games last season with LeBron on board.

The adjustments go beyond the stats discussed and will include leadership and team chemistry, especially after adding three valuable veterans, and then Shabazz Napier via the Draft. Pat Riley may feel good right now about his team, but we aren’t sure he’ll remain that way come next June.