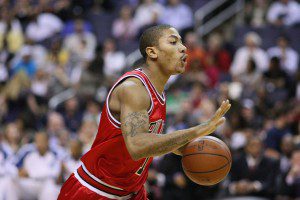 It’s been a minute since Derrick Rose stepped on an NBA basketball court to compete, and saying that his fans miss him dearly is an understatement. Well, he’s coming back again, but this time there isn’t any flash about it. This isn’t “the Return” part two; it seems more like a gritty path to regain what he once had: a spot at the top of the NBA elite mountain. Rose will rise again, but this time around the expectations are lowered. Now he has something to prove, and Rose is at his most dangerous when doubt hangs over his head.

He’s only 25 years old. That can honestly be a good or bad thing, because he’s already had two serious knee injuries at such an early age. Then again, he’s able to bounce back faster because of his young age. Can it happen again? You bet it can. Bad news never ever has good timing, just look at what happened to Paul George. As of right now, Rose seems to be vibrant right now, and he’s making a lot of heads turn at the training camp for the USA basketball squad.

Determination is something to be admired, no matter what the outcome, and Rose has a whole lot of that. He definitely still has that “it” factor that the greats have, as he seems that he can push himself to be what he wants to become, just like he did in 2011 when he won the MVP. Rose is a man that gives 100 percent, and it’s rare for people to actually do that. So, what can we expect from Rose once he hits the hardwood floor? A couple things are of high possibility: he will be rusty, and he will give it everything he’s got to climb back to the top of the NBA elite. Sounds like a plan.

For right now, we can just read about the hype and watch some clips, but let’s not inflate our expectations of him too much. Rose really needs to let the game come to him and not rush the process of finding his groove. There are some lofty things being said about him by some NBA All-Stars, including Paul George, who’s seen Rose practice at Team USA’s training camp.

“He looks like he’s coming off the MVP year. He’s really been aggressive. He’s been flying across the court. We’ve seen him last year in the regular season; it still looked like he was holding back a little bit. It doesn’t look like that here,” George told ESPN.

If life knocks you down, you either come back stronger or stay down. Rose isn’t staying down and will reach towards the light as his name already suggests. Not to mention, he’s coming back to a new and improved team that’s arguably better than the 2011 Chicago Bulls squad. Pau Gasol is an amazing addition that will give Rose the consistent secondary, shot-creating offensive threat that he’s always needed. Additionally, Jimmy Butler, Taj Gibson, and Joakim Noah have all improved their games. All the pieces seem to be there for a championship run, they just have to manage to stay healthy.

Keeping the positives in mind, let’s not get completely swayed by the hype. However, it is quite difficult when D-Rose is showcasing some explosiveness at the Team USA’s Blue-White game that’s leading up to the FIBA World Cup. From the looks of things, the saying “fast don’t lie” is still true for Rose. We’re all just hoping that he can stay healthy, and that still may have something to do with the way he plays the game. He’s going 100 miles per hour all the time on that hardwood floor, and that may take a toll on his legs; however, that is his natural swagger. They say that what doesn’t kill you only makes you stronger, so here’s to hoping that’s what’s going down.

D-Rose is back, as in he’s going to play again, but let’s not watch every play and throw exclamation points at it. Expectation is the root to frustration, especially in the world of sports. If anything, we should doubt what he’s able to do with a basketball. He needs to prove himself once again, and there’s no better baller out there right now to do just that.