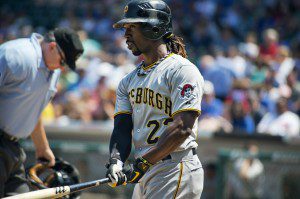 When physical education curriculum was shaped in the nascent days of American public education the main tradition embedded within these programs was the British emphasis on fair play; students would learn through competitive sports the value of discipline and how to strive for greatness and with equal measure respect the opponent striving towards their own greatness.

If La Russa, Towers and Gibson regularly attended PE class their ideas of sportsmanship would not include grousing about the Los Angeles Dodgers’ celebration, musing about cutting players refusing to retaliate, playing the role of school yard bully to baseball pariahs then experiencing instant karma, and definitely wouldn’t get caught defending obviously hostile actions.

Perhaps this cavalier attitude about player safety is a top-down problem, owner Ken Kendrick scolded Stephen Drew for not returning sooner from a gruesome ankle injury. Drew’s foot was snapped close to 180 degrees from its proper position. Apparently Drew should have returned in 6-8 weeks.

The safety of the Arizona Diamondbacks’ opponents exists solely as an abstract concept embedded in the minds of the “weak” upon review of the franchise’s actions and statements.

A baseball when propelled from the hand of a pitcher towards the leather-bound hand of a catcher is a deadly weapon. Ray Chapman dies because Carl Mays threw a baseball.

Actually, that’s an oversimplification of the incident. Ray Chapman died in 1920 because a common practice was to dirty up a new ball when received. This meant dirt was rubbed all over the ball, along with tobacco spittle; the ball was also scuffed horribly, and spitballs were a common practice. By the time a ball was thrown in 1920 the object hurtling towards the plate vaguely resembled a sphere. For Chapman, fans that day observed that he failed to move out of the way of the ball, as if the twilight and the ball engaged in macabre fusion. The ball hit Chapman’s head with such incredible violence Mays thought it was a ground ball – he threw to first to get the out. Chapman died 12 hours later.

After Chapman’s death, baseball required the umpires to change out balls that were increasingly grimy; the hitter should have a chance to live. They also banned the spitball.

Tony Conigliaro was on the cusp of stardom in the Red Sox’ “Impossible Dream” season of 1967. On an August night, his life would change due to a pitched baseball. Rico Petrocelli described Tony C’s beaning. A strange confluence of circumstances could be blamed, ultimately Conigliaro returned to the game but lacked the same concussive effect of presence exhibited prior to the injury. Conigliaro’s injuries included retinal damage, growth of a cyst behind his eye, a broken orbital bone, dislocated jaw and permanent vision impairment. Conigliaro later wrote that he believed the pitch from Jack Hamilton was accidental. 47 years later, Hamilton still laments that pitch, even though history remembers the incident as nothing more than accidental tragedy.

That’s the key: accidental. Ray Chapman and Tony Conigliaro weren’t victims of retaliatory pitching instead they became the face of workplace danger. A 95 mph fastball arrives at home plate in four-tenths of a second. It takes more time to say, “one one-thousand.”

Andrew McCutchen has gracefully sidestepped any question of intent regarding the pitched ball from Diamondbacks’ hurler Randall Delgado. Publicly attributing his avulsion fracture to repeated swings the reigning MVP is failing to provide accelerant for the mounting cries of Arizona critics. McCutchen fails to explain that an avulsion fracture results from bone breaking off from the larger bone mass due to physical trauma. The trauma a 95 mph fastball to the back can inflict. That an exciting player such as McCutchen is injured is not the most tragic part of this incident, the greater tragedy is that everyone watching Paul Goldschmidt become an unintentionally hit batsman the night before knew that McCutchen was going to get hit.

The difference between the Pirates hitting Goldschmidt and the Diamondbacks hitting McCutchen resides in organizational philosophy. The Pirates pitch up and in with the goal of altering a hitter’s eye level in turn making the batter susceptible to swinging at pitches low and away. This philosophy is Baseball 101 and Pittsburgh has never been accused of playing dirty.

The Diamondbacks are fake tough guys resembling a crotchety old man perched on his porch admonishing the unruly (in his opinion) neighborhood kids. They hit opposing batters because of pride. They gripe about opposing teams and players because of their self-appointed role of guardians of all that is right about baseball. They traded Justin Upton because he wasn’t “gritty” enough. They created a team based around a code word (grit) and muddled their way to consecutive 81-81 seasons. As of this writing their record is 49-66. They play far worse at home than on the road. Kendrick has staffed his field operations office with a CEO that has expressed support for the radical ideology of the Tea Party, expressed support for and attended Glenn Beck’s pallid “Restoring Honor” rally, arrested for DUI and boasts a dossier of instructing pitchers to throw at hitters intentionally. Kendrick’s General Manager fired the team’s pitching coach because the coach refused to instruct his pitchers to throw at hitters. Kendrick hired a manager that publicly calls out current players with schoolyard threats, offers up blatantly false explanations upon his pitchers hitting batters, and fist bumps his pitcher after the hurler is ejected for intentionally throwing at another player. Cranky old men creating then broadcasting predatory clubhouse culture is unseemly, creepy and incredibly dangerous.

The great shame of the Diamondbacks is not their adherence to the arcane code synonymous with ancient Babylon or their public broadcasting of the same. The shame is someone will get hurt more seriously than McCutchen. The Pirate center fielder’s rib was cracked in half due to impact. Think of a car accident. If a car collides with a tree at 45 mph the chance of death is serious. Imagine that same accident if the car is travelling at 95 mph – death is expected and survival would be celebrated. Only this object traveling at 95 mph is a baseball. A baseball that has killed a man, ended the career of another and intermittently forces great players to go on the disabled list to heal. Carl Mays and Jack Hamilton lived and live with the guilt of altering the life of a hitter through no intent of their own.

The Diamondbacks practice a vicious form of baseball. If a player refuses to conform to this twisted ethos then his job is in jeopardy. Baseball needs to punish Gibson for issuing dugout orders to hit players, Towers for threatening the livelihoods of opponents, La Russa for defending the indefensible and Kendrick for enabling a baseball operations department’s inferiority complex to endanger ballplayers. If baseball fails to act, the questions asked will not be about the lack of ethics involved in Arizona’s self-appointed police role, instead the question will be if the game can recover from horrific injury inflicted at the hand of a pitcher acting on an organizational dictum.