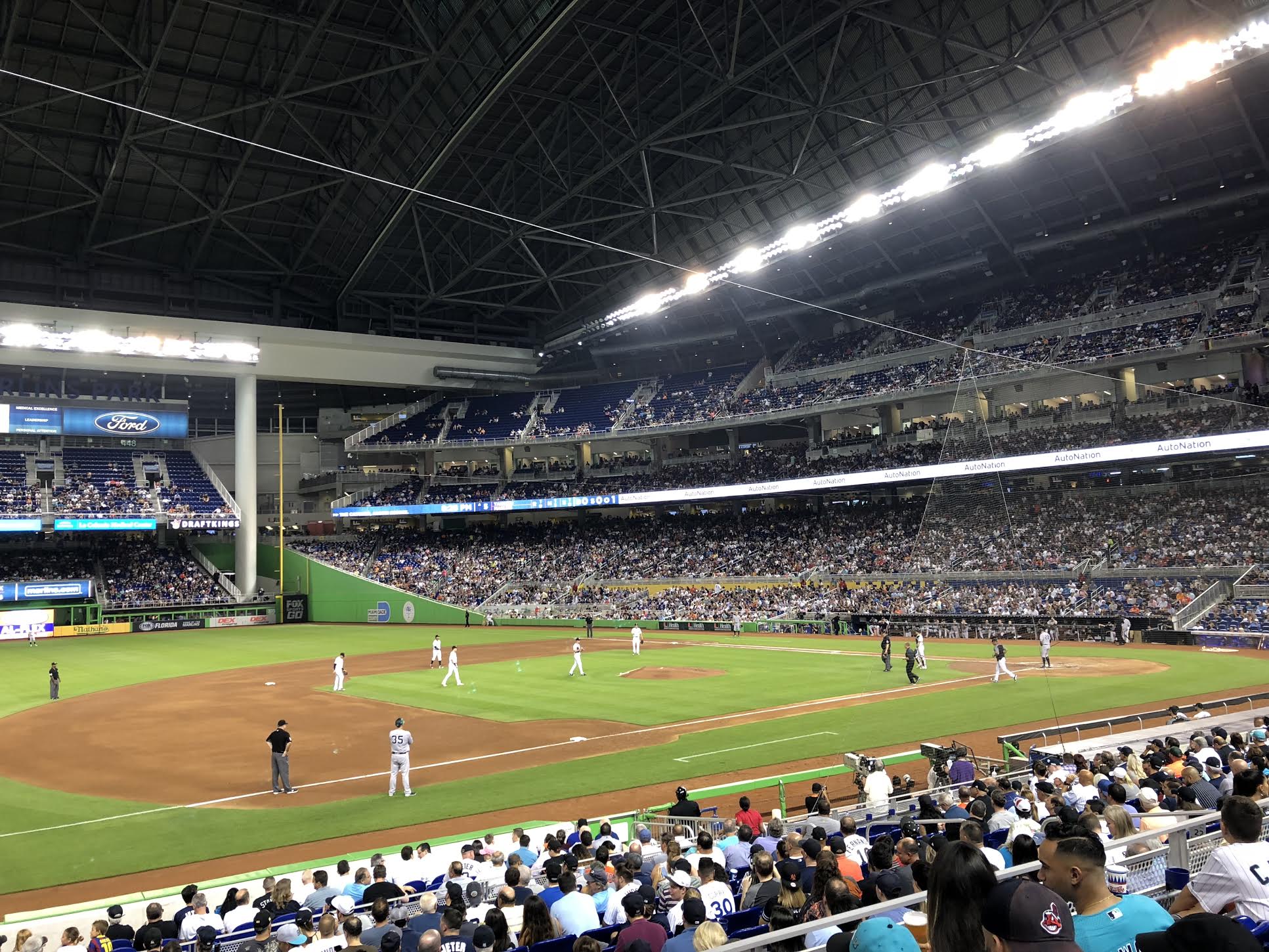 I flew into Miami on a hungover Delta with no checked bags. I had just a Mariano Rivera shirt (that I got at the last game he pitched in Yankees Stadium) to change into and the tickets on my phone, plus the go ahead from my editors Frank and Dennis. Write what you want, they said. Well, they didn’t account for my voice or traffic or Vodka in the Sprite Zero bottle.

Here we go. As a Yankees fan I was stoked and on board.

My friend Mike picked me up forty minutes late in a Lexus convertible with Sade blasting. The air was disgusting and heavy. Anyone who tells you Florida is paradise is lying; it’s a gross swamp full of roads always in construction and shopping plazas that have seen better days. Mike and I grabbed drinks in the ghetto and met Ty and Ari and a slew of other hard starters, all Yankees fans. South Florida is like the sixth borough: Jews from Brooklyn and Italians from the Bronx, Puerto Ricans and Cubans and randoms like me who don’t fit the mold.

We were set up with shots like a mile away but remember this is a driving town, full of Auxiliary cops. We figured we had time to meet up, have a drink or six, and then get to the game which is, again, only a mile away. Plus we all had parking passes. Boy, were we wrong. We could’ve rolled like kids on a hill and gotten there faster. The traffic just wasn’t moving. My friend Mike started to lose it. I have never seen him mad or curse this much. He kept building up to a yell: “I just don’t fucking understand how we are not moving at all.” Rightfully so.

I checked the game on my phone and it was the bottom of the first. Not bad, but we were still not moving. I am usually the one of my crew to lose his cool, not Mike, but he was yelling at cops and parking attendants, and littering for no reason, like, take that, Miami! We ended up parking on the top of a garage, knowing full well it would be a nightmare getting out. 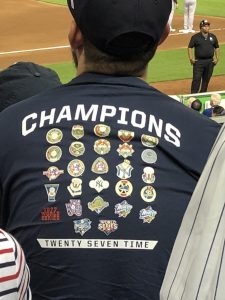 Finally, we get in and run into Ty and Ari who also just got in, missing three damn innings. We are all fuming but just wanted to get to our seats to watch our beloved Bronx Bombers, who despite injuries, are still in the hunt. I started a cross-section-wide chant of PARKING SUCKS! I have since tweeted at the Marlins and Derek

Jeter but haven’t heard back.

Their record still at the tops, with an extra inning win the night before, we figured the team had this game in the bag. We even placed some bets. Yankees were winning 1-0 when we sat down with our peanuts. Mike had fifty on full with a bookie. Ty had twenty straight. Ari and I argued like bastards.

The whole place was filled with Yankees fans. The dudes behind us were the types of old school New Yorkers who pronounce Bathroom as Batroom. The family in front us were from Harlem, bringing their kids for the first time. The place was roaring for the pinstripes. We made friends with a guy with no teeth who was cursing up a storm and I thought to myself that Jon Contino would love this cat. We argued about injuries, especially since some of our main guys were out. We cursed the Red Sox, and prayed to face the Mariners in the Wild Card, as the A’s have been on a hot streak. We got beers and all was well.

Nothing We Can Do Now

Talking to some Marlins fans and asking about the parking, I soon discovered that the city was so desperate to keep the team in Miami proper that they expedited the building of the stadium by demolishing the cheap land in the ghetto and rushing the completion without really thinking about traffic in and out. This is tripled when teams like the Yankees are in town. Now. I don’t know this to be true, but a few families around agreed, saying they were supposed to build a “sports complex” up in Broward near wear the Florida Panthers play, which, according to them would have been great.

The Marlins were pitching a great game, and the Yankees couldn’t convert bases to runs. Soon the Marlins took the lead. I’ll be honest, I don’t know any Marlins players’ names. Giancarlo Stanton got on base but didn’t dominate as sports fans would hope for his first return to this godforsaken swamp. Maybe it was because of the sweltering night heat or the bugs, or maybe he also got stuck in traffic. I wonder if Stanton gets road rage.

A Man on Second and Third 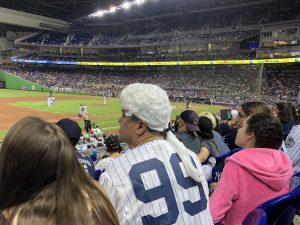 With the game winding down, JT Riddle (who looks like a child) nails a homer and the Marlins go up 9-3, so fair-weather fans start filing out, and we all took bets on how long it would take us to get out of here. Ty said fuck it, ditched his wife and got a hotel. Ari Ubered to the airport. Mike and I were heading north to Fort Lauderdale (I was also helping him move the next day). At that moment it was not yet 10pm.

The Yankees showed a bit of life. They got a man on second and third, with Brett Gardner up. A three run homer would have put them just three runs back. “Put your rally cap on,” Mike said. However, Gardner struck out and the game was over. Suddenly the Marlins fans showed themselves, cheering loudly. Apparently, they do exist, but I could’ve sworn I saw a guy who was wearing a Yankees shirt now wearing a Marlins shirt.

Back in the convertible Lexus, we found ourselves stuck at the top level of the parking garage, not moving an inch. I used this time to desperately try to figure out what to write. After all, my wayward editors sent me here for some goddamn reason. Mike was cursing. I fist-bumped a guy in a Thurman Munson jersey, because he was my favorite growing up. I loved that he took no shit and had an awesome mustache.

“Awesome jersey,” I said to this fellow who was obviously very drunk. “You know Munson?” He said surprised. “Know him?!?” I said, “I’m his daughter.”

I thought this would piss him off or make him laugh, but the dude was so drunk that he just believed it. He even called over his friend, touting loudly that I was Thurman Munson’s daughter. Keep in mind, I am a man with a beard.

Finally, the traffic started moving and the convertible came in handy, because the wind felt nice and made the swamp air move. We were rocking out to yacht rock on the FM radio, cruising on the interstate, when all of a sudden the traffic just outside of Miami comes to a standstill. No joke, we barely moved for over an hour. At one point, I had to pee so bad that I hopped out ran to the side of the highway, scaled down an embankment, peed near a hobo camp, then climbed back up the embankment and found Mike’s Lexus that maybe had moved up one car length. The worst part is that we were stuck near a sign that said NEXT EXIT 7 MILES. 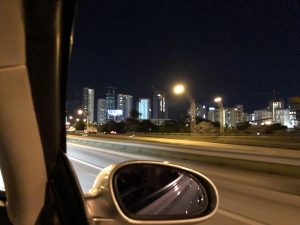 The Winner of the Bet

Strangely enough, while in traffic, I hear someone yell Ryan. I look over a few lanes and see my old buddy Victor who is a Yankees fan but also thinks he is better at movie trivia than me. We shoot the shit over some cars. He asks what I am doing in Florida, I shrug. It’s a small world when you’re a Yankees fan.

I text Ty and Ari to see if they made it. The bet was that Ari would board before Mike and I made it out of Miami. The dots on the iPhone start popping up, indicating that someone in the group thread is writing, but then my damn phone dies. That’s when you just have to look up at the moon, when you are stuck in traffic with car exhaust killing your nostrils, your face is melting because somehow even the night is humid, and pray for patience. Your face is melting

We got back to Mike’s condo around 1:30am. I repaired that I do not have to go to Miami again for at least another five years. No matter if my editors pay me more, that town was conceived by imbeciles, and while it may have good food, it has very little going for it. The next day, I helped Mike move and then flew back to New York City, where at least the summer heat has purpose.