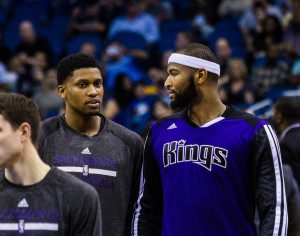 A change in ownership and the ruling regime of the Sacramento Kings prior to the 2013-14 season has instilled new hope among the team’s fan base, and has made playoff contention a goal effective immediately.

The upcoming 2014-15 regular season will likely be the first true measure to gauge the franchise’s growth since Vivek Ranadive’s ownership team took over control of the organization.

The Kings have a never-ending list of variables for the year of basketball ahead, and is a team still plagued by uncertainties with its first preseason matchup against the Toronto Raptors just over a month away and the regular season starting soon after. I’ll try to cover and answer as many of the questionable aspects of this team as fully as possible, but I’m sure that by the time I finish writing this Sacramento will have made another huge move or trade that may or may not render everything I say completely outdated. For the time being, let’s hope the Kings are set on how to improve this team.

It’s always a legitimate cause for concern when a ridiculously talented player who isn’t even close to reaching his full potential has knee troubles, but in this case Cousins’ pain may be trivial. His knee-to-knee collision during a team USA practice in Chicago showed no structural damage, according to team physician Dr. Lisa Callahan. His MRI results, as well as his gradual recovery which he claims is working fast, shouldn’t have Kings fans worried.As Cousins enters his 4-year/$65 million contract, the growth in his game should and will be noticed immediately. He’s been playing for Coach Krzyzewski and team USA, he’s recieved a new, relateable mentor in Shaquille O’Neal, and he’s had the full cooporation and support of the Kings franchise in his constant improvement as a player. A sure All-Star candidate for this season, it’s not going to be long before Cousins is ranked as highly as Joakim Noah and Dwight Howard as one of the league’s best centers. With more of the scoring responsibility on his shoulders in the absence of Isaiah Thomas’ 20 points per game, this year will likely be the year that he transitions from star to superstar.

The new guy in Sacramento will be playing to support his surrounding cast, plain and simple. The high-intensity scoring display that was Isaiah Thomas will be turned into an equally quick, reliable point guard with greater passing ability. Sacramento championed Thomas’ defiance of the assumption that late second-rounders are virtually irrelevant to the NBA’s makeup, but his transfer to the Pheonix Suns may have dawned the arrival of a more realistic guard for the Kings’ circumstances. Having a ballhandler whose main objective is to feed Kings’ scorers (Cousins, Rudy Gay, and Ben McLemore when he decides that he’s actually a pretty good shooter), is likely a better approach to the game than having a point guard who holds the ball for 15 seconds then finesses his way into the paint to get himself a bucket. It’s good for the growth of Cousins as a player, primarily, but a guard with experience as a starter and a pass-first approach to the game is a huge positive for the Kings.

Primarily Ben McLemore, Ray McCallum, and the guy who the Kings picked over Noah Vonleh and a slew of equally talented players, otherwise known as Nik Stauskas. This team better hope that Stauskas shoots the ball as well and as aggressively as he did in college, or else the “Jimmer 2.0” claims will fly every time someone even mentions Kings basketball, and the joke will get really old really fast.

All jokes aside, this team has done an impressive job assembling a backcourt filled with talent which can be developed and made a staple of Sacramento’s offense. As it stands now, the Kings have been willing to invest in these young shooters, hoping that they will make this franchise a long-term home. McLemore and Stauskas should be a ton of fun watch play together, as it’s been made clear that both are competing for playing time. If McLemore can step up his game on the defensive side of the ball rather than missing rotations and letting less athletic players blow by him, we will likely see Stauskas playing at the point and McLemore defending shooting guards for decent portions of the game. As entertaining as that sounds, both players are simply trying to shoot the basketball better than the other, and if Stauskas’ YouTube fame is any indication of how he might play in the NBA, he should be in pretty good shape.

For McCallum, the departure of Thomas is a positive in his career. He’ll likely get more minutes while backing up Collison, who still has something to prove to Coach Malone and the team’s front office. He completes a fast-paced, energetic backcourt which should be deadly if it can play together in transition and hit at least 40 percent of the open three pointers it takes. Just 40 percent. Please. I’m begging.

As hopeful and optimistic as the Kings front office may be for a playoff run in the near future, the earliest this team could make a serious push for the playoffs is 2016. The Oklahoma City Thunder, San Antonio Spurs, Los Angeles Clippers, Golden State Warriors and a slate of formidable teams won’t give much leeway to a team fighting for an eighth spot in the post-season. That said, this upcoming season is the most important step to become dangerous in a Western Conference packed with wildly talented rosters. The Kings will be better than they were in the 2013-14 season, but not by much. Pete D’Alessandro has made building through the draft top priority, and finishing just outside the lottery won’t do this franchise any good. If the Kings can show signs of growth while being bad enough to earn another lottery player, it can make a more legitimate case for the playoffs by the time the 2016-17 season comes around. The organization is surely planning that far into the future.