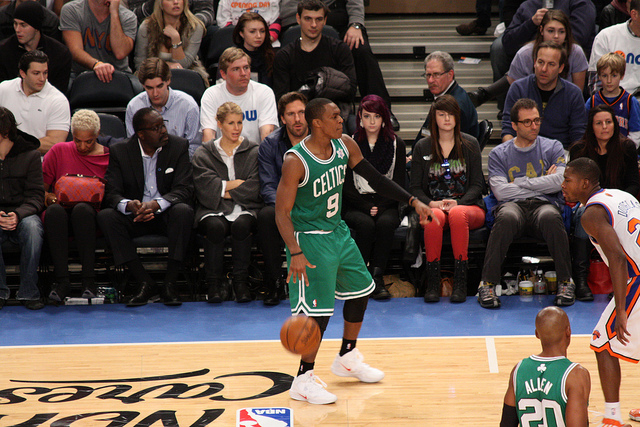 The summer of 2014 has been a wild  one for the NBA. Stars have been traded and big decisions were made. LeBron James is headed back to his hometown and rejoining the Cleveland Cavaliers, Carmelo Anthony is sticking with the New York Knicks headed by Phil Jackson and Derek Fisher, and Kevin Love is meeting up with LBJ in Cleveland to try to win his first championship. But, the big time moves don’t end there. The rumors of Rajon Rondo joining another team before the new season begins are still hot.  And yours truly strongly believes that the star point guard could leave the Boston Celtics at any moment.

Rajon Rondo will become a free agent in the summer of 2015. The Celtics front office and management strongly believes that Rondo will explore and test the market when this time comes. He might ask for a max deal too that the Celtics couldn’t match. With this situation in mind, Danny Ainge and his crew will eventually have to trade the All-Star point guard if they want to get anything in return before he hits the market, just like what the Timberwolves did with their main man Kevin Love.

The Sacramento Kings are one of the many teams being linked to the Rajon Rondo trade. Although both camps strongly denied that a Rajon Rondo deal is being discussed, still, it might happen anytime.

Rajon Rondo will surely become a huge addition to the Kings if the trade happens. Knowing the kind of skills and talent the 28-year-old point guard has, he will surely carry the Kings offense not with scoring but with his play making and flawless orchestrating.

Aside from the Kings, the Houston Rockets are also reportedly keeping an eye on the eight-year veteran point guard. After Jeremy Lin joined the Los Angeles Lakers and Chandler Parsons signed with the Dallas Mavericks, the Rockets are reportedly open for another big star. If ever Rondo will be traded to the Rockets, he can surely complement James Harden. He might become the third star that the Rockets’ Harden and Dwight Howard are eagerly looking for.

The Denver Nuggets also hinted that they might sign the All-Star point guard if is included at any trading block. With the kind of flexibility in terms of salary cap, they won’t have a hard time signing the Celtics point guard. The thing is, will the Celtics trade their star without getting any players in return? My answer is yes, they might since they are still at their rebuilding phase and releasing Rondo will clear some salary space.

The other team that expressed interest in the past is the New York Knicks. If Phil Jackson decided to push the trade and get Rondo to play alongside Carmelo Anthony, it will surely mean a lot. Rondo will absolutely complement the Knicks and Melo.