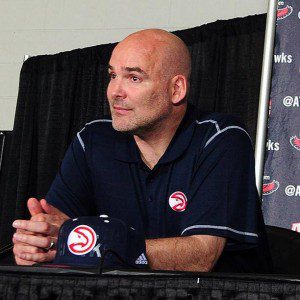 The NBA has found itself in another racial scandal this year. And while the Donald Sterling saga is over, this one has just begun.

From the West, the new scandal shifts to the East as Atlanta Hawks GM Danny Ferry faces the eye of the storm.

But should Danny Ferry be fired? Let’s find out:

Atlanta Hawks owner Bruce Levenson broke the news earlier this week and reported that he was selling his shares of the Atlanta Hawks. As written by the USAToday.com on September 8, 2014:

Atlanta Hawks controlling owner Bruce Levenson has self-reported to the NBA that he sent a racist e-mail in August 2012 and will sell his interest in the team. Levenson reported the e-mail to the NBA in July, almost two years after it was sent but while the league was deep in litigation over the now-completed sale of the Los Angeles Clippers. The investigation was ongoing when Levenson decided to leave the team. The e-mail, to Hawks President Danny Ferry, details Levenson’s belief that the Hawks’ fan base was too heavily African-American.

But just when the world thought that Levenson’s email was the only racial issue at hand, it has opened a can of worms. According to Yahoo.com on September 8, 2014:

The trigger of events that led to the toppling of Atlanta Hawks owner Bruce Levenson began with general manager Danny Ferry referring to free agent Luol Deng as having “some African in him” on an organizational conference call.

The disparaging racial reference to Deng triggered at least one team owner on the call to pursue an independent investigation into how the organization operated in regard to race. The search uncovered the 2012 email that Levenson sent to Ferry and two minority owners that ultimately led to Levenson’s decision, under pressure, to sell his stake in the Hawks.

So for the second time this year, an NBA ownership will change hands because of a racial slur. This time, it doesn’t just involve the team owner, it started from the front office and GM Danny Ferry.

Who is Danny Ferry?

Danny Ferry was hired as the general manager of the Atlanta Hawks in 2012. He was also the general manager for the Cleveland Cavaliers from 2005 to 2010, and a former vice president of basketball operations for the San Antonio Spurs before moving to Atlanta.

Before taking these front office jobs, Ferry was one of the best collegiate basketball players of his era. He was drafted second overall in the 1989 draft by the Los Angeles Clippers, but signed with the Italian League. He was then traded by the Clippers to the Cavaliers, where he would spend the majority of his NBA career.

Ferry moved on to the San Antonio Spurs in 2000 and was a key reserve on the Spurs’ 2003 championship team.

Throughout his long relationship with the NBA, Ferry never showed any indication that he is insensitive or intolerant on issues of race, until “his comments” on Luol Deng.

Luol Deng is a 10-year pro who has career averages of 16.0 points, 6.3 rebounds, 2.5 assists, and 1.0 steals per game. He spent nine and a half seasons with the Chicago Bulls before he was traded to the Cavs in the middle of the 2013-14 season, which was the last of his Bulls contract. So when Deng hit free agency this summer, he was one of the hottest commodities in the market.

This is where all this controversy started.

According to Adrian Wojnarowski of Yahoo! Sports, the phone call in question was about free-agent targets, as Danny Ferry was going through names that included Carmelo Anthony. It sounded like he was reading an ordinary scouting report, until the topic went to Deng.

While the initial reports were that he referred to Deng as having “a little African in him,” that was just the tip of the iceberg.

According to Danny Ferry, the offensive words that came out of his mouth during that fateful meeting were not his. As reported by Yahoo.com on September 10, 2014:

Ferry’s clinging to the story that the racially charged words belonged to someone else – that a riff connecting Africans to a con man stereotype weren’t his words at all.

Whether those were his words or not is besides the issue at hand. The issue is that he read it aloud as if he were a suicide bomber, waiting not only to blow up the Hawks, but himself as well.

If Luol Deng chose to go to war, this whole thing could have escalated. Instead, he chose a classy reply that has doused most of the fire. In a report from CBSSports.com on September 9, 2014, here are parts of Deng’s statement:

“I’m proud to say I actually have a lot of African in me, not just ‘a little.’ For my entire life, my identity has been a source of pride and strength. Among my family and friends, in my country of South Sudan and across the broader continent of Africa, I can think of no greater privilege than to do what I love for a living while also representing my heritage on the highest stage.”

Deng was born in Sudan, but he’s lived in Egypt and England. He has been a British citizen since 2008, and played for Great Britain in the 2012 London Olympics.

However regardless of his nationality, citizenship, or origin, he should have been scouted as to his talents as a basketball player, not the color of his skin.

Deng has represented his race well in the NBA. He’s an image of hard work and success. No matter what personal things that scouting report says, Deng’s basketball career in the NBA has been a success.

Luckily, Deng ended up signing with the Miami Heat and not the Hawks. That would have made this even worse.

Danny Ferry has since apologized to the whole world, but that does not change a thing. What he said has been said, and it is out for everyone to read and hear. The world, as it is, has reacted—both for and against Danny Ferry.

The ever vocal Los Angeles Lakers legend Magic Johnson has led the calls for Danny Ferry’s ouster. As reported by WN.com on September 12, 2014, Johnson said:

“Atlanta Hawks GM Danny Ferry should step down after making racist statements about NBA player Luol Deng. I feel bad for my good friend and Hawks CEO Steve Koonin, who has been put in an awkward position by the comments from Levenson and Ferry. The City of Atlanta and the Hawks fans deserve and should demand better from the Hawks leadership.”

On the other hand, Ferry got a surprise shot in the arm from NBA Commissioner Adam Silver. Silver said this, via USAtoday.com on September 10, 2014:

“The discipline of a team employee is typically determined by the team, and in this case the Hawks hired a prestigious Atlanta law firm to investigate the circumstances of Danny Ferry’s clearly inappropriate and unacceptable remarks,” Silver said. “In my view, those comments, taken alone, do not merit his losing his job.”

Ferry is said to have been reprimanded by the Hawks, but not fired. According to FoxSports.com on September 9, 2014:

CEO Steve Koonin on Tuesday told the Hawks’ flagship radio station that he made the decision to discipline Ferry but allowed him to keep his job managing the team. He did not say what the punishment was, but noted that he relied on a law firm’s three-month investigation of Ferry and him describing Deng as someone who “has a little African in him.”

There are still a lot of reactions being made everywhere, and this issue is not dying anytime soon.

Let’s pick up a couple of points here.

The NBA has done its share in this issue, by conducting an investigation last July after Levenson voluntarily reported the matter to the NBA. According to WashingtonPost.com on September 8, 2014:

Silver met with several owners and high-ranking league officials in New York to discuss a strategy about how to deal with Levenson’s situation.

The NBA office deals with the teams and its owners, and it has properly dealt with the Hawks and Levenson by investigating and “forcing” the sale of the Hawks. However this case is different, because unlike the stubborn Donald Sterling, Levenson spared the NBA from further hassle by informing the league office of his plan to sell the team.

Now let’s go to the Hawks. Let us not question the wisdom of their judgment in keeping Danny Ferry. As reported, they hired a top notch law firm to investigate, and they based the punishment on that report.

Law firms, lawyers and laws deal with facts and evidence. The Atlanta Hawks must know something that we don’t know right now to justify keeping Danny Ferry at this point. However, the NBA isn’t a business that thrives on facts and evidences alone, it thrives on feelings and emotions of the players and their fans. That’s where the problem is.

Danny Ferry may have the legal basis to stay, but he may have lost the confidence of his team, the city, and the NBA fans.

If Ferry had a hard time living up to his lofty expectations in the NBA, this one’s a lot harder. It’s not about his talents and skills anymore, it’s about him as a person, his credibility and his ability to lead. After all, it’s not just managing that a GM does, it’s winning games and NBA titles. If he can no longer have a grip on that locker room, he has to go, regardless of what Adam Silver personally thinks.