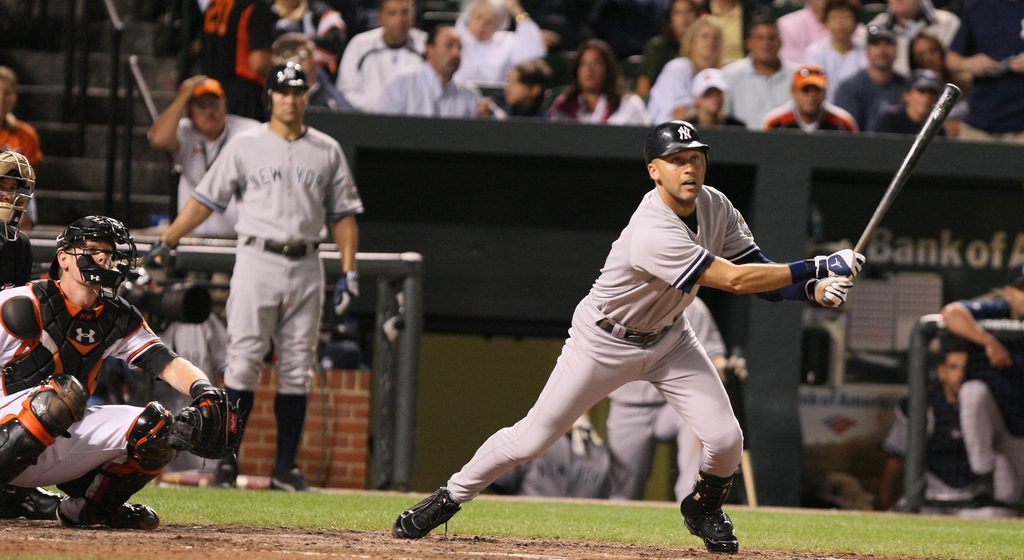 Derek Jeter is retiring; Monday, September 29, 2014 is the day the baseball world will refer to as Day 1 of A.H.H.D.J. (After His Holiness Derek Jeter) – and I couldn’t be happier.

My Derek Jeter experience consists of near-constant terror, Captain Intangibles possesses an innate ability to ruin the fortunes of my beloved Boston Red Sox at times most critical. Prior to The Greatest Comeback in the History of Sports, Jeter was the tip of the Yankee spear lancing the hearts of Red Sox Nation. Not only did he consistently ruin many an autumn, but he did so with the business-like demeanor of a professional hitman. Hating Jeter is what needed to be done, he was the great enemy. A good-looking guy that inside-outed the ball with that New York-white collar cool stood as the antithesis of the hardscrabble tough guy Boston teams. Like clockwork, those pre-2004 Red Sox teams would encounter Jeter and all hell would break loose. He wasn’t even a smiling assassin, there was no joy in his thorough dismantling of New England’s baseball aspirations – it was business as usual. At least The Hammer of God (Mariano Rivera to the uninitiated) seemed to delight in slamming the door coldly on Fenway dreams. No, we don’t like Jeter, but we respect him. The man never gave baseball fans a reason to dismiss his character – he embodied that tired “played the game the right way” cliché, there was no Pete Rose-style savagery (oh piss off Cincinnati – Rose is a thug piece of garbage disguised in stupid “Charlie Hustle” mythologizing that needs to go ahead and die. The only difference between him and Ty Cobb is the racism).

Here’s a timeline of Derek Jeter’s career through the eyes of a Red Sox fan:

1996 – Jeter and the Yankees win their first World Series of my lifetime, a Sophomore in High School I’m inundated with irritating Yankee fans questioning my loyalty to my home state of New York because I was fervently rooting for the Atlanta Braves. Damn you, Jim Leyritz.

1997 – The Warden grants a reprieve from Jeter-prison because the Indians somehow managed to beat the Yankees, it appears all is well, perhaps the Yankees winning the World Series and having to endure a winter of insufferable Yankee fans is a rare, one-off event that happens once every 20 years.

1999 – Stupid Atlanta Braves. How can one of the greatest pitching staffs ever suck so much against the Yankees?! At least Pedro defeated Roid-ger Clemens at Fenway preventing a sweep.

2000 – Ah, a Subway Series! Meet the Mets….for 5 games. If it’s possible for New Yorkers to be more insufferable about baseball, 2000 proved all bets were off. Compared to 1998 and 1999, the Mets stealing a game instead of being swept made this Series “competitive”.

2001 – Jeremy Giambi doesn’t f’n slide, and now a million replays of “The Flip” takes place. Not being content with this, the baseball gods are complicit in the creation of the stupid Mr. November mythos. Great! Grand! Wonderful! If the Yankees won that World Series the Jeter mythology would be Dante’s lost ring of hell for Red Sox fans.

2003 – All is good, the Red Sox are winning and Pedro has just finished out the 7th. Now Timlin gets the 8th, Scott Williamson locks down the 9th, and the Red Sox head to the World Series! Wait, what? WHAT THE HELL IS PEDRO DOING COMING OUT IN THE 8TH?! ARE YOU HIGH GRADY LITTLE?! NOW JETER’S UP! OH NO! THE HORROR! THE HORROR!

2004 – Game 3 of the 2004 ALCS the Yankees win 19-8, during the massacre Jeter is shown pumping his fist as the Yankees continue scoring as if they’re not only the best team in baseball but the most popular guy on prom night. I’m not sure how I didn’t have a drinking problem at this point.

2005 – Present – Yes, Jeter still inspires horror, but the massive, nauseated feeling consistent with his presence in important spots in the game dissipates. 3 World Series titles in 10 years after decades of public castration allows Sox fans like myself a chance to appreciate Jeter’s place in the game with great respect yet not forgetting how for 6 years he performed open heart surgery on a region without the benefit of anesthesia.

Jeter is 6th all-time in hits. He will leave the game with a lifetime average over .300. His postseason heroics are shoved down every baseball fan’s throat as if baseball just started in 1996. Jeter is a 14-time All-Star and Rookie of the Year, in 2006 he was runner-up for the AL MVP. He’s won 5 Gold Gloves. And that’s where I call bullshit.

Derek Jeter SUCKED at shortstop. He will finish his career with nearly every statistical measure of defensive efficacy showing him to be laughably ineffective. From 2004-2013 he wasn’t even the best shortstop on his own team! Yankee fans would counter this criticism by citing Jeter’s “intangibles” and then somehow committing derisive nickname jiu-jitsu by turning Jeter’s nom de guerre amongst the anti-Yankee crowd of “Captain Intangibles” into a compliment! Jeter’s collection of Gold Gloves is the single reason that award is now a joke. The only players with more Gold Gloves at shortstop are Ozzie Smith, Dave Concepcion, Luis Aparicio, Mark Belanger and the sublime Omar Vizquel. In 2000 he committed 24 errors. Statistically, he was always rated as below average; no amount of claiming that his positioning and athleticism allowed him to be late on plays that other shortstops had no prayer of getting to changes this. I watched Jeter play for 20 years, I always wanted the ball hit to him.

The overrating of Jeter extends to his hitting as well. Listening to broadcasters and reading writers suffer from diarrhea of the mouth or pen describing the “greatness” and “class” of Jeter is an unholy affront to the great history of the Yankees and baseball. Yankee fans claim that greatness is measured in World Series titles – by that design Jeter isn’t even the best Yankee shortstop of all-time! The honor would go to Phil Rizzuto’s seven titles and lifetime .273 batting average. Jeter benefitted greatly by playing in New York – which one of these player’s career numbers is Jeter:

Player A is Jeter, Player B is Craig Biggio, Player C is Robin Yount. Both Jeter and Biggio deserve to be in the Hall of Fame, and it’s criminal that Biggio was not elected on the First Ballot and instead should be elected in January. Yount is a first-ballot Hall of Famer

Biggio and Yount’s biggest deficiency compared to Jeter is batting average, yet Jeter had all those years on great teams, Biggio’s best teams in Houston were in the latter years of his career and Yount had 2 MVP seasons but one World Series title. Also, the Wild Card format allowed Jeter greater opportunity for postseason play.
Biggio lead the league in doubles 3 times, Yount twice, Jeter never. Biggio lead the league in runs twice, Jeter once, Yount never.

Biggio lead the league in stolen bases once, Jeter and Yount never.

Biggio merited consideration as a superior defender at every position he played (catcher, second base, left and center fields), moreover he moved positions to accommodate better players, as he did when Jeff Kent and Carlos Beltran arrived in Houston.

Biggio was also an All-Star at Catcher and Second base. Yount was one of the best outfielders of his time. Biggio holds the National League record for most homeruns to lead off a game and holds the record for being hit by pitches more than any player in baseball. Biggio’s resume has equal weight as Jeter’s; both men are equivalent to Yount’s achievements.

If Biggio or Yount played in New York, there is no doubt their achievements are amplified as Jeter’s. This is not to say Jeter isn’t a great player, he is. The greatest shortstop ever? Hardly.

Still, the thought of baseball without Jeter is odd. He is a great player who handled his business with uncommon grace and always gave everything. He is forever a thorn in the sides of Red Sox fans and should be honored for his Hall of Fame career. It is not disrespectful to note that Jeter is no Babe Ruth, Lou Gehrig, Joe DiMaggio or Mickey Mantle. Jeter is a player that spent his entire career with one team and accumulated great memories for his fans and community – but he’s not worthy of the fawning, blustery goodbyes. Save those for the truly transcendent players upon their retirements – paging Mike Trout and Clayton Kershaw…