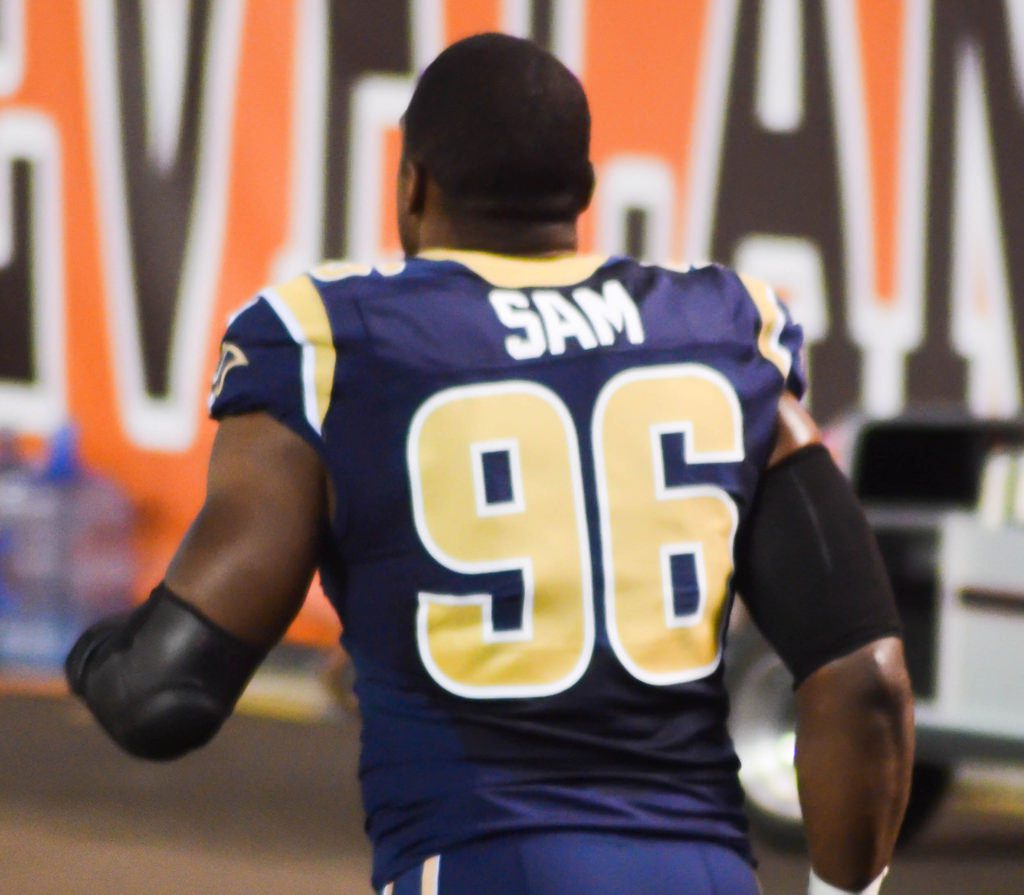 “Ohhhh, I know that name.  Why do I know that name?”  Back before the NFL draft this April, Michael Sam came out regarding his homosexuality, becoming the first to do so as it related to the NFL.  Before this was made public knowledge, mock-drafts had Sam going anywhere from the late first round to the mid fifth.  A standout defensive tackle from the University of Missouri, Sam had some obvious question marks surrounding his size and power to play his current position in the NFL, despite his statistic production in college.  Sam is built much like you’d want a linebacker to be built.  He stands a respectable 6’2” and weighs in around 260lbs.  If Sam had the speed to play as a linebacker, he would have gone much higher, but sadly his 4.91 second 40-yard dash time left a lot to be desired in that category.  If he had the strength, teams may have opted to try to beef him up and let him play as a defensive tackle on third downs.  A paltry 17 reps did not fit the bill.  When I looked at Sam, I saw him as a five or a seven technique (a defensive end or outside linebacker in a 3 – 4 defense).  This was really the best fit for him, assuming he could put on 10lbs and maintain his 10-yard split.  But really, the story here has always been Sam’s sexual preference, and not his talents or abilities.

The St. Louis Rams eventually drafted Michael Sam in the seventh round.  Coach Jeff Fisher liked his motor, and given the “platoon” style of defense, Sam was regarded as someone who could contribute.  Throughout the preseason, Sam showed his abilities were not quantifiable in ways measured at the NFL combine.  He recorded three sacks in limited playing time (be it against offensive substations most of the time).  At the end of the preseason, Sam was one of many players who did not make the final cut and was released by the Rams.  So many players are cut from teams each year in the weeks leading up to the regular season that this really shouldn’t even be news.  There are hundreds of seventh round picks that had the same thing happen to them.  Sam’s sexual preference is the reason it was discussed.  The team, the coach, the owner, could they all deal with the added attention?  Could they get over the stigma and their own personal bias regarding (what should be) a non-issue?  Would the media eat the team alive, claiming this was a direct result of his sexuality and not because of his performance?

I suppose it’s fortunate that very quickly after his release, the Dallas Cowboys snatched Sam up to play on their practice squad.  The Cowboys were/are decimated by defensive injuries at all levels, and Sam’s “tweener” stature made him more versatile and potentially more likely to see playing time in the league.  The news of the Rams release was quickly replaced by news of his signing on with Dallas.  The media never had time to get into the reasons, and even if they did, it was yesterday’s news.  Sam fell into media obscurity in Dallas.  He spent seven weeks on the practice squad, never seeing time as a part of the starting roster.  Partly because I think the Dallas defense that was playing looked pretty good, and partly because his play on the practice squad left something to be desired for defensive coordinator Rod Merinelli.  The Cowboys and Rams both play traditional 4 – 3 defenses.  Sam is too slow to play as a backer and too small to play on the line.  This past week Sam was released from the Cowboys practice squad to make room for a linebacker.

At this point, the story about Sam’s sexuality is a footnote.  The media has been absolved of all interest in this story, as there is no sizzle in it.  Were it not for the publicity of Sam’s announcement, it wouldn’t even be a story.  “Mediocre football player cut by club” doesn’t get any coverage because it happens all the time.  Sam might get picked up later on this season by any number of teams that run into injury problems along their front line.  He may even make it onto the teams active roster, and if so you will hear about it, but until then the status of Michael Sam will continue to be a footnote in the sports reporting world.

For the record, I feel like the media has done a good job of not overblowing either teams release of Michael Sam.  For the same record, I think that Sam deserves to be commended for his courage.  I am certain agents, friends, and family all told him to not come forward with this information before the draft.  I imagine the advice may have been to not come forward with it until he retired.  To his credit, Sam stood up and said who he was to the world knowing there would likely be consequences.  For no other reason should we remember the name Michael Sam.  He’s not a hero, or a superstar, or even a benchwarmer.  Sam is just a stand-up guy who does what he thinks is right, even at great personal expense to him.  That is the type of guy that you have to respect.  That is the sort of person you should always remember.