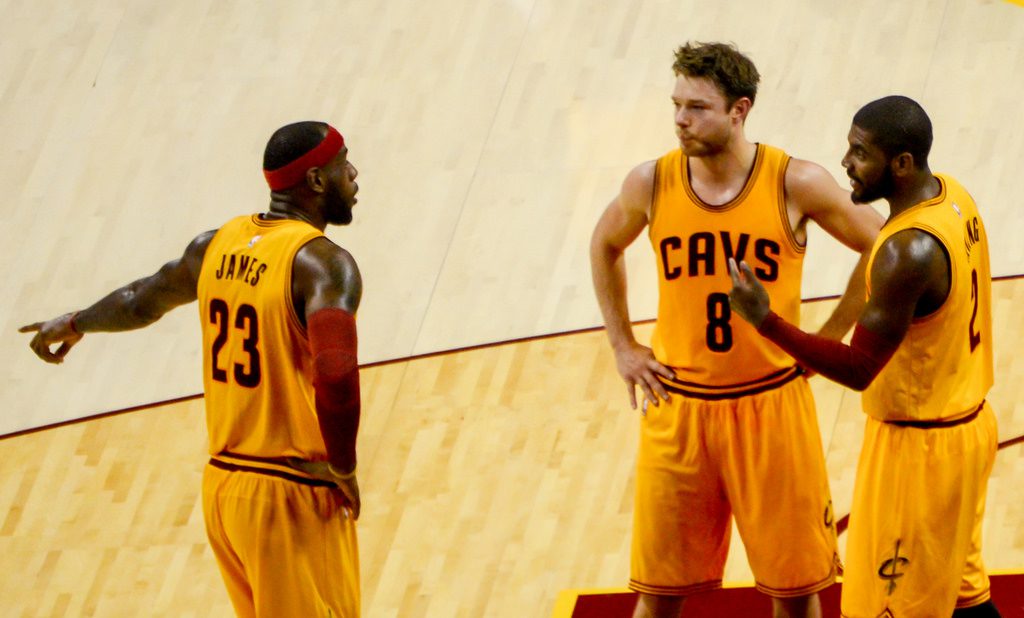 There is a massive fissure in the Cleveland Cavaliers locker room between Kyrie Irving and LeBron James.

“Oh man, as you can see, we are on opposite ends [of the practice court] so it means we hate each other,” said Irving, tongue firmly planted in cheek, at a shootaround before tonight’s matchup at altitude against the Denver Nuggets.

“It was over Buyers Remorse and Family Guy. That’s what it was about,” he continued.

“Obviously he is going to feel strongly about Buyer’s Remorse, I mean, it’s his show. And I love Family Guy. So, heated exchange, words were said … no blows this time, but it’s awesome for our team.”

The star point guard’s joking demeanor struck a decidedly different tone than that of his teammate in question just a few moments prior. When asked about a possible heated exchange between the two, LeBron James remarked, “Those reports are untrue. We have not had a verbal exchange but I understand that negativity sells.”

On this, at least, the pair are in lockstep. Though different methods were employed, the same message came from both James’ stoic, matter-of-fact answer, and Irving’s 30 seconds of stand-up; there is not a rift, and it’s going to take some time for this team to become the monster that most of us expect and fear it will become.

Speaking of “teamness”, when asked about the low assist rate the Cavs and their point guard have been posting, Irving says, “We definitely have willing passers, we’re just missing shots. It’s going to take some time to make it work. It’s a learning process every single day and I’m just glad we have the type of guys on this team who are willing to learn, including myself, and willing to grow. I’ve never been on a closer team.”

That last thought should scare you unless you are a fan of the Cleveland Cavaliers. James’ first year in Miami is a perfect example of how it can take teams of exceptional talent time to gel on the floor, but If this team is as tight as Irving claims, and can remain so off the court, the results on the court will come. They are just too talented not to.

“Everyone wants overnight success,” speaketh the King, “but it just doesn’t happen in team sports. We are in a ‘win’ league, but you can’t shortcut the process along the way.”

They also can’t afford to get distracted and they know it.

“I know all about it,” James says of walling off outside craziness and hype, “For our team to be as good as we want to be, we can’t worry about what’s going on on the outside.”

“The only thing that matters is what’s going on in our locker room,” agrees Irving. “I mean, besides the feud that Lebron and I have, [in the locker room] it’s all good!”

James channeled Aaron Rogers on Twitter this morning, telling fans and media alike to “relax”, but the pressure is coming from more than just us pestering press. The supposed super team has been put on notice by the rest of the NBA.

“There’s a sense of urgency every single day,” Irving admits, “We have a target on our back but we just have to be the hunters instead of the hunted all the time. We have to come out and hit people in the mouth.”

All of this can be summed up quite nicely in a response James gave to one of his own quotes about having to “challenge” some guys on his own team. It very well could  have been an answer to any of the questions seemingly plaguing the Cleveland Cavaliers at the moment; “It’s too early.”