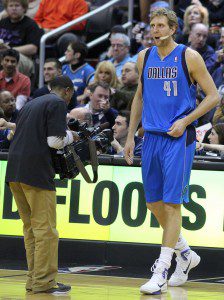 Even in the world of sports, a particular elegance is required in order to successfully one up your opponent – a canorous groove that athletes must fall in with one another on the court, field, diamond, track, whatever, in order to flow as a unit. When the Dallas Mavericks faced off against the Portland Trail Blazers on Thursday evening, the tune was off. The tune was clearly tone-deaf, the visiting team having become rather irascible during the second half – with damn good reason. The Mavericks offense just wasn’t clicking, especially during that deadly third quarter – a quarter that appeared to be their Achilles’ heel. The reckless nature of their shooting was starting to scrape at the scoreboard, their vigor that once showed at full force during the first few games dissipating. The Mavericks needed anything, everything, all.

In front of a, well, not-so-sold-out crowd in Salt Lake City, the Mavericks prepared to face off against the Utah Jazz, a team they recalled all too well during the 2001 playoffs. Given, this wasn’t the same team, on both ends, and they wanted to prove it within the first quarter. But first they needed to shake off the fragments of Thursday evening, where everything that could go wrong, did go wrong: Mavericks starting small forward Chandler Parsons, his Oscar-worthy fake pump aside, was in a rather dismal slump. Same with Jameer Nelson. Tyson Chandler wasn’t working as a machine on the defense. The bench was lackluster. And above all, Nowitzki wasn’t, well… his normal Dirk self. Within the first few minutes on the court in the echo of the EnergySolutions Arena, Dallas showed why they wouldn’t (and shouldn’t) be underestimated by taking a strong 24-17 lead inside the first quarter, with Dirk leading the way with seven points as the Mavs held Utah to their lowest scoring quarter of the season.

Second quarter wasn’t much different with Dallas going on a 13-2 run within the first couple of minutes. It was the Nowitzki Show as he nailed three after three, helping widen the gap for his visiting team, leading 39-28 with only 5:16 remaining in the half. It was Chandler who made the show stopping play of the quarter, however, when he hit the court, holding his thigh in pain, before performing a cherry pick off of Devin Harris from across the court, thrusting his team to lead 45-34. Trey Burke drew the home fans back into it with his flawless three at the buzzard, cutting the Mavs’ lead to only eight.

The noxious smell of third quarters from the past few games hovered over the Mavericks as they emerged from the locker room, the victors anxiously looking not to be smothered anytime soon – at least, according to the casual observer. Monta Ellis opened up the fatal third and took his team on a impressive 7-0 run that extended his teams’ lead to 59-44 early on. With only a couple of minutes remaining in the quarter, the Mavericks equaled their biggest lead at 17 points, leading 71-54, with Nowitzki charging the frontlines with 20 points and eight rebounds, followed by Tyson who had a 10 and 10.

Well, that was pleasantly unexpected?

The dominos fell into place after the visiting team managed to turn a blind-eye to their third quarter woes, their malfeasance lost in a brief huff.

Within the minutes of the final quarter, Dirk put up his first double-double of the season, muting all naysayers who mumbled that at 36, Nowitzki was well past his prime. He managed to scoot past Parsons, the golden boy in training to be the next face of Dallas who was unusually quiet for the past two games, and put up 27 total points as the final second died. Thanks to the big guy, Dallas would easily brush their way past the Jazz 105-85.

When working together, you have to have a finely oiled machine, as the Mavs understand. Moving in-sync with the beat takes more than just numbers on a page, it takes chemistry and learning from your mistakes. Although, sometimes the desperate ointment needed to cure a burn is a classic remedy. A remedy spelled D-I-R-K.

Dallas goes on to face the Miami Heat at home on Sunday evening.