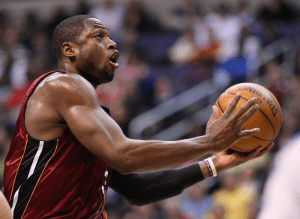 You can point fingers all you want. You can complain till you’re the same shade of blue on Dallas Mavericks’ home court. You can make excuses: “It’s Refgate 2.5! Chandler Parsons isn’t feeling well! They just wanted to get home to catch the new episode of The Walking Dead!”. But the fact of the matter remains that the Mavericks haven’t won a game against the Miami Heat since Game 6 of the 2011 NBA Finals. Miami came in hard after finishing off the Minnesota Timberwolves one day before and shot a whopping 55.3 percent from the floor in the Dallas Mavericks ’ house on Sunday evening, stealing the first of the Mavericks’ four-game homestand 105-96. So, understandably, the Mavericks’ locker room reeked of Aqua di Gio and bitter regret after the game.

Head coach Rick Carlisle was irritated during the post-game press conference. “I’m concerned about how we’re competing as a team,” he said, his expression scarily neutral. “We have a problem right now from top to bottom with consistency. When our level of competitiveness comes up to where it should be on a consistent basis, a lot of our problems will dissipate.”

Small forward Chandler Parsons appears to be one of those problems Carlisle was referring to. The 26-year-old has been struggling and is currently 2-of-20 from the floor during the Mavs’ last two games and scored a microscopic four points against Miami. “I think that has a huge impact, especially with a team that’s coming off a back-to-back,” Parsons said when asked about the hardness factor that the Heat brought and what it attributes to the loss. “There’s no way they should come into our building, on our home court, and play harder than us.”

Hard indeed. The Heat managed to pull ahead of Dallas by as many as 22-points during the game, and shaded in the Mavs’ dark mood. Luol Deng had an extremely strong performance and put up 30 for the visitors, while Monta Ellis put up 23 for Dallas. “He was terrific,” Carlisle said of Deng. “We let him get going early and never did enough to disrupt his rhythm.”

Not to say the game was without its odd calls and warped occurrences. At one point, 6’2 Mario Chalmers shoved 7’1 Dallas center Tyson Chandler and looked like a mouse about ready to take on a lion. Dirk Nowitzki seemed to be carrying the entire offense on his back up until Ellis stepped up during the second half. Even the usually struggling Jae Crowder took the reins during the final minutes and put on a mini clinic. “I thought he guarded the heck out of (Dwyane) Wade,” Carlisle said of Crowder’s performance. “He hit shots and you knew he was out there. He’s gotten my attention and we need more guys to follow his lead.”

Dallas look to Tuesday night, where they face the scorching hot Sacramento Kings.