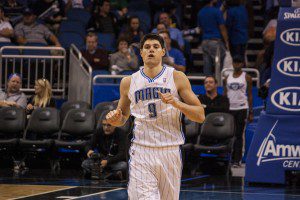 The Orlando Magic entered the contest against the Brooklyn Nets riding a two-game winning streak and a wave of momentum. It would be a good test for rookie Elfrid Payton to face up against Deron Williams, who has certainly played extremely well for the Nets so far this season.

The offense was clicking well for the Magic for the majority of the contest. The team moved the ball well, and most of the points scored in the first half came from off of assists, mainly from Payton, and Evan Fournier. Turnovers continue to be an issue for the Magic as they coughed up the ball 17 times for on the evening. They also left a lot of points at the free-throw line as the team went 10-of-16 compared to the Brooklyn Nets who went 20-of-23.

Nikola Vucevic had himself another great game. He put up 27 points and 12 rebounds, notching his fifth double-double of the season. Although Vucevic had a monster game, he saw zero touches in the fourth quarter. The Magic’s offense went completely cold after Channing Frye made a three-pointer with 6:23 remaining in the contest. The Nets took advantage and eventually pulled away with the game.

First-year international player, Bojan Bogdanovic, had a sensational game, leading all Nets players with 22 points. Deron Williams finished the game with 18 points and 7 assists. Joe Johnson had 13 points, 4 assists, and 5 rebounds. Mason Plumlee and Brook Lopez both finished with 12 points each.

Nik Vucevic led the Magic with 27 points. Evan Fournier had 19 to go along with 5 assists. Channing Frye had 13 points shooting 3-of-4 from downtown. Tobias Harris and Luke Ridnour finished with 11 points each.

Magic travel to the great North to face DeMar DeRozan and the Toronto Raptors Tuesday.